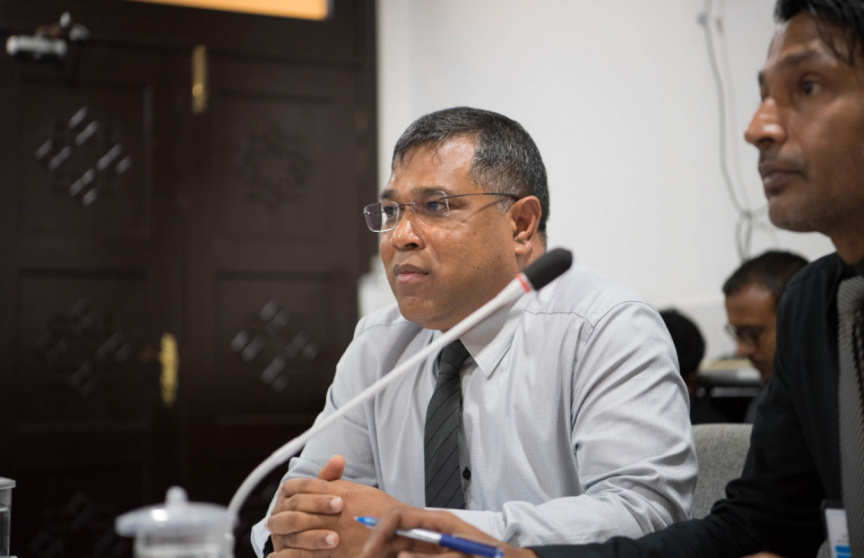 Deputy CEO of Bank of Maldives (BML), Mohamed Shareef responds to questions by Public Accounts Committee of the Parliament on July 16, 2019. (Photo/People's Majlis)

Speaker of Parliament, President Mohamed Nasheed says the Presidential Commission on Corruption and Asset Recovery has sent a letter to the Parliament establishing that the information provided by Bank of Maldives (BML) deputy CEO Mohamed Shareef during a parliamentary committee meeting regarding the Maldives Marketing and Public Relations Corporation (MMPRC) embezzlement and money laundering case is false.

Speaking at the parliamentary sitting this Monday, Speaker Nasheed announced that he has filed a case with the police against Shareef after both the Public Accounts Committee of the Parliament and he, himself found the information provided by Shareef during the committee’s meeting on July 16 to be false.

Nasheed says the police confirms it has launched an investigation into the case.

“And, I have been sent a letter from the Presidential Commission on Corruption and Asset Recovery which says in clear terms that the commission, in its investigation into the suspected embezzlement and corruption activities which took place from within MMPRC have irrefutable evidence six cheques crossed as non-negotiable which were received by MMPRC as payment for lease acquisition costs for islands and lagoons were endorsed, and allowed to be deposited by Bank of Maldives into the SOF Private Limited’s USD bank account at the bank,” said Nasheed.

Senior officials of BML were summoned for questioning regarding the MMPRC case by the Public Accounts Committee on July 16.

At the meeting, Shareef said the bank had followed all criteria set down in endorsement regulations and laws to the letter when it approved the deposit of endorsed cheques to MMPRC’s account.

He said that the law set down policies for cross cheques, and establishes that only cheques crossed as ‘non-negotiable’ cannot be endorsed.

He said that none of the endorsed cheques which were deposited into SOF’s bank account had been crossed as ‘non-negotiable’.

Pictures of cheques made out to MMPRC which were crossed as ‘non-negotiable’ but allegedly deposited to SOF Private Limited’s bank account went viral over social media platforms shortly after Shareef made the claim.