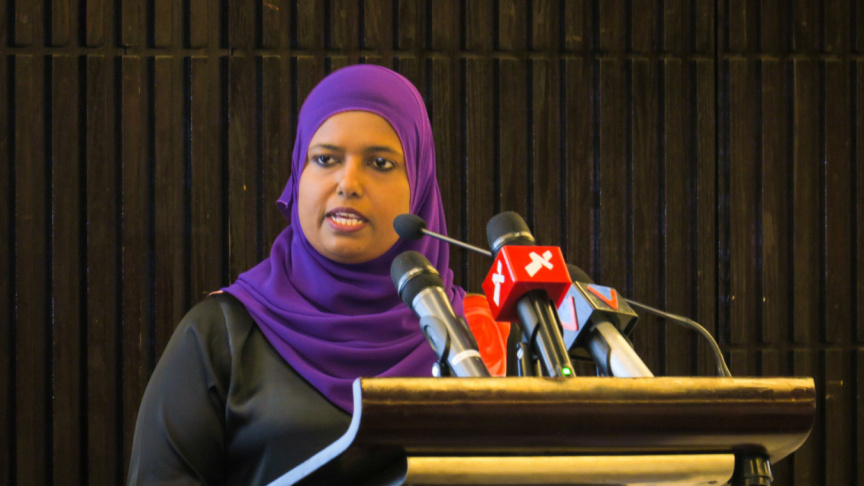 MDP, which enjoys a supermajority at the Parliament, convened for an emergency meeting on Wednesday afternoon.

The meeting was attended by 45 parliamentarians, and the vote in favor of not allowing Shidhatha to remain in office had been unanimous.

The information of Gender Ministry’s prior knowledge of the allegations against Hishan had come to light during a High Court hearing on Tuesday, held in response to an appeal filed by Hishan following a 2018 Family Court ruling which denied him legal guardianship over a young mentally handicapped man, who is believed to be one of his victims.

It also led to South Galolhu MP Mickail Ahmed Naseem presenting an emergency motion urging action against the Gender Ministry earlier on Wednesday morning. MDP parliamentarians who took part in the debate demanded Minister Shidhatha’s resignation, and threatened to initiate a no-confidence motion if she refused.

Mickail, who presented the emergency motion, said that while he did not believe the fault lay directly with Gender Minister Shidhatha herself, but that it was she, as the person in charge of the Gender Ministry, and not its receptionist, who must bear responsibility given the extent of the State negligence in the case.

“I take this opportunity to call on Minister Shidhatha to resign, even if it’s out of sheer shame. And if she does not resign, I respectfully ask the government to remove her from office. And if this doesn’t happen, I urge this honorable Parliament, if you honorable parliamentarians have even the least bit of conscience, to initiate a no-confidence motion against the Gender Minister,” said Mickail.

Some things should never be compromised, he added.

Many had pointed out during the debate that it had not been the first time for Shidhatha to be accused of negligence.

Ban on import of live animals from several countries