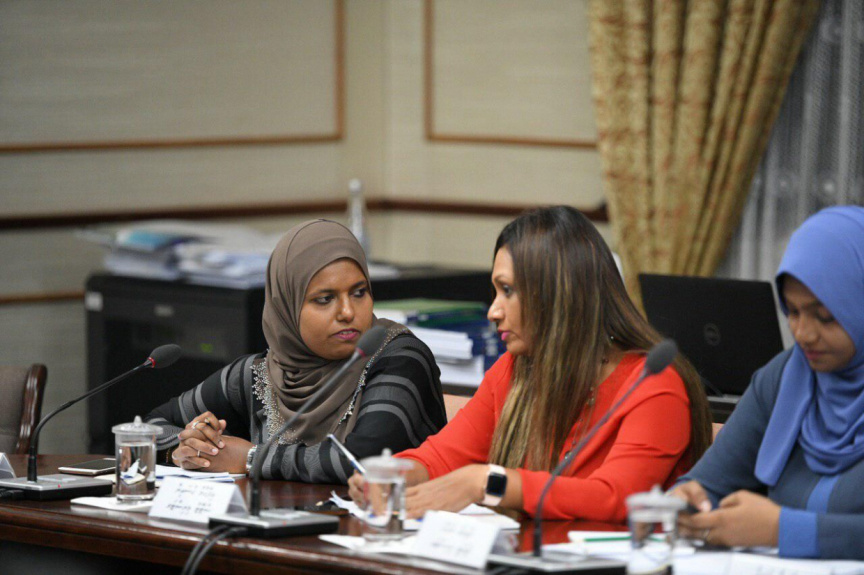 Gender Minister Shidhatha Shareef is questioned by Parliament's Human Rights and Gender Committee in its inquiry into the rape of a toddler in Southern Maldives on January 18, 2020. (Photo/People's Majlis)

Sun has been able to verify existence of a social worker stationed at the Gender Ministry’s administrative center in G. A. Atoll, putting Gender Minister Shidhatha Shareef’s claim that the center hadn’t been staffed in a year into question.

Shidhatha had made the claim on Saturday, when questioned by the Parliament’s Human Rights and Gender Committee in its emergency inquiry into the rape of a toddler. She said that the ministry had been looking for staff to work in its center in G. A. Atoll for one year. She said the situation was dire not just in that one center, but in several centers across the atolls.

“Even if you look at the physical condition of some of these places, or the number of employees in these places. One such example is the lack of any staff in the G. A. Atoll center. It has been approximately one year since we have been looking for a staff member,” said Shidhatha.

However, Sun has been informed through a reliable source that the center in G. A. Atoll employees one staff member. An assistant social services worker in charge of case management who is currently on six months of maternity leave. She went on maternity leave on September 1, 2019.

The center, in addition to the social worker, had also employed an administrative officer. A position which is now vacant after the previous officer resigned.

Minister Shidhatha’s claim has also been contested by former Prosecutor General Muhthaz Muhsin, who said that he had filed a case with the center in G. A. Atoll in 2019, and even met with a senior staff member at the center.

He said the Minister Shidhatha’s claim could be taken as a deliberate act of giving false information to the parliamentary committee.

G. A. Atoll councilor, Hussain Adam told Sun the Gender Ministry recently interviewed applicants for two positions at its center in the atoll.

Minister Shidhatha told the committee on Saturday that the civil service regulations were sometimes posing a challenge to hiring staff for Gender Ministry centers.

A spokesperson from the Parliament said the HR and Gender Committee was scheduled to conclude its inquiry and announce its decision this Sunday.

Committee braced for decision in rape of toddler