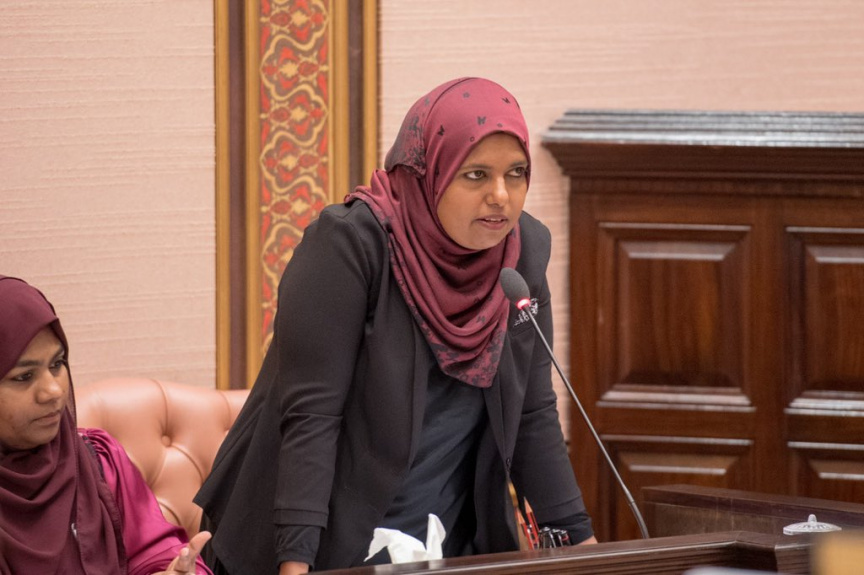 Minister of Gender, Family and Social Services, Shidhatha Shareef responds to questions at the Parliament on July 15, 2019. (Photo/People's Majlis)

Gender Minister Shidhatha Shareef, on Thursday, announced her decision to resign from office.

Shidhatha’s decision to resign comes one day after the parliamentary group of Maldivian Democratic Party (MDP), which enjoys a supermajority at the Parliament, voted against allowing her to remain on the Cabinet.

The MDP parliamentary group had convened for the vote following the revelation that Gender Ministry not only had prior knowledge of the allegation of sexual offenses against the former honorary disability ambassador Ahmed Hishan, but remained placid and allowed him to be designated the honorary disability ambassador and receive multiple national awards.

The information of Gender Ministry’s prior knowledge of the allegations against Hishan had come to light during a High Court hearing on Tuesday, held in response to an appeal filed by Hishan following a 2018 Family Court ruling which denied him legal guardianship over a young mentally handicapped man, who is believed to be one of his victims.

It also led to South Galolhu MP Mickail Ahmed Naseem presenting an emergency motion urging action against the Gender Ministry earlier on Wednesday morning. MDP parliamentarians who took part in the debate accused Shidhatha of incompetence, and demanded her resignation. They threatened to initiate a no-confidence motion if she refused.

The latest scandal to hit Gender Ministry comes mere weeks after it, along with Maldives Police Service, was accused of negligence in preventing the rape of a 20-month girl in G. A. Kanduhulhudhoo.

One of the men arrested in the case, the victim’s great-grandfather, had been on trial for the sexual harassment of another local girl for two years. According to the police, he had not been kept detained but allowed to be released back into the community “out of consideration of his old age”.

Meanwhile, Gender Ministry said it had not been made aware the man had such a history. The institution was hit with criticism over a child being allowed to live in the same residence as a suspected child sex offender.

President Ibrahim Mohamed Solih, in his annual address to the Parliament on Monday, acknowledged that State institutions had been negligent in preventing the crime.

The crime has sparked an uptick in reports of similar cases of sexual offenses against children, some spanning back decades, and an increase in organized protests demanding the government for more effective action.

Shidhatha, who attended the first such protest, held on January 17, was met with jeers by protesters who demanded her immediate resignation.

She responded that she would willingly resign if anyone could guarantee her resignation would result in a cease in sexual abuse in Maldives.