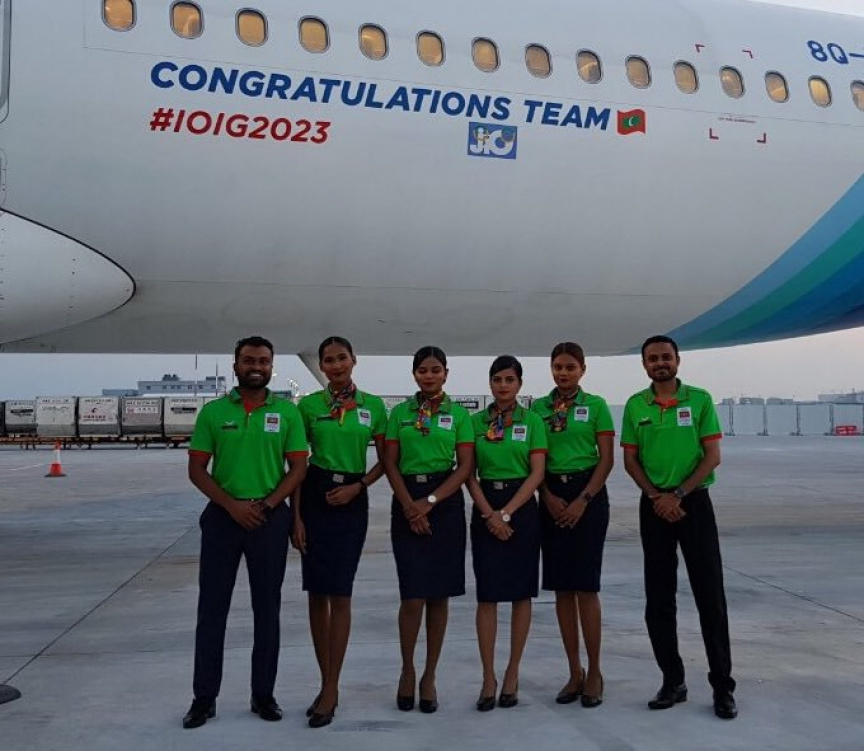 Crew of Maldivian Airlines pose for a picture before departing to Mauritius to carry the Maldivian contingent which took part in the 10th IOIG back home to Maldives on July 29, 2019. (Photo/Maldivian)

The national airlines, Maldivian Airlines has dispatched an Airbus A-320 to Mauritius to carry the award-winning Maldivian contingent which took part in the 10th Indian Ocean Island Games back home.

“We have departed to Mauritius to receive the team which has brought glory to our nation. In Sha Allah, you shall meet the Maldivian team this evening,” announced Maldivian in a tweet this Monday.

Everyone on board the Maldivian’s flight – from the captain to the cabin crews – were wearing the jersey worn by the Maldivian contingent at the IOIG.

‘Congratulations Team’ is painted on the side of the plane along with the Maldivian national flag and “#IOIG2023’ – in celebration of the success of Maldives’ bid to host the next IOIG which will be held in 2023.

The Maldivian contingent which took part in the 10th IOIG in Mauritius achieved the biggest success at an international sporting competition in nation’s history with 15 medals.

The contingent took part in 10 sporting events and achieved success in most of the sporting events. The achievement of the women’s table tennis and badminton team is especially remarkable. The women’s table tennis team won three gold medals, two silver medals and one bronze medal; and the women’s badminton team won one gold medal, one silver medal and two bronze medals.

The contingent is scheduled to arrive in Male’ City at 4 pm this Monday.

Sports Minister Ahmed Mahloof has invited as many members of the general public as possible to gather at the Republic Square to welcome the athletes back home.