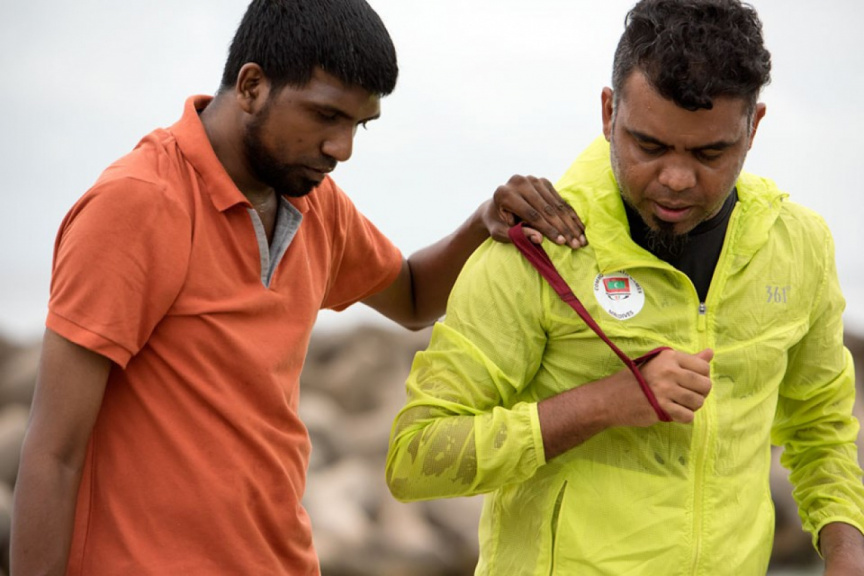 Marey first met Mazin in 2016 and invited him to compete at this year's IOIG instantly. (Photo/Marey's Facebook)

The ongoing Indian Ocean Island Games in Mauritius is the first time that the Maldives is competing in the Para category event. And yesterday saw the country win its very first medal in the event as well. The athlete who won that prestigious honor is Mohamed Mazin who won the bronze medal in the 100-meter running event.

The visually impaired athlete was celebrated for his courageous effort and for making his country proud, but this is not a journey that started at the start line of the race. Mazin’s talent was first noticed by the Secretary-General of the Maldives Olympic Committee Mr. Ahmed Marzoog (Marey) in 2016. He has had a lot of high expectations for Mazin ever since.

“I first met Mazin in 2016, and I instantly gave him the invitation to join and compete at the Indian Ocean Island Games this year after seeing his talent,” said Marey.

Marey said that when he told Mazin how he believed Mazin could win at the Indian Ocean Island Games, he was met with tears of joy. Then and there, Mazin devoted himself to that one goal, the goal of bringing success to his country. Today he has completed that goal and the promise he had made to Marey, but he is adamant that this is not the end for him and wants to keep bringing his country honors in the future as well.

Mazin could have won the gold or silver medal at the event yesterday had it not been for an unfortunate accident that saw him stumble and fall. This misfortune caused another runner to take up the position that Mazin had been occupying.

“I hope that this is good enough victory for the country on my first try.” Said Mazin after the race.

His efforts were appreciated and celebrated by a lot of people in the country including the Sports Minister Mr. Ahmed Mahloof who tweeted that Mazin was an inspiration and an icon to his country who had gotten right back up even after falling to keep running.

The Minister had actively participated in Mazin’s training sessions for the games to motivate him even further. Minister Mahloof had said that Mazin was a man with incredible speed and that he had every guarantee that Mazin would win a medal at the IOIG.