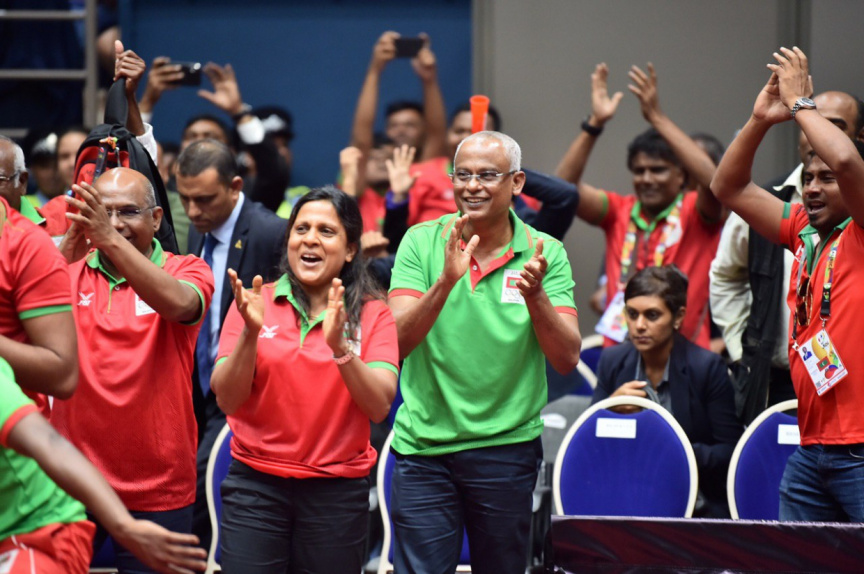 Maldives has won the bid to host the 11th Indian Ocean Island Games in 2023.

The announcement was made by President Ibrahim Mohamed Solih in a tweet this Saturday.

Maldives submitted its bid to host IOIG 2023 at the Intercontinental Hotel of Mauritius – the location of the currently ongoing 10th IOIG – on Saturday, July 20.

It is with great pride I announce that Maldives has been officially selected to host the 11th Indian Ocean Island Games in 2023. Maldives has participated in all 10 editions of the IOIG. So it’s fitting that we return the hospitality extended to us by our fellow island nations.

Other countries which made formal bids to host the next IOIG are Madagascar and Comoros.

Hosting the IOIG was announced as a top priority of the current administration in its efforts to develop sporting in Maldives.

Sports Minister Ahmed Mahloof and Foreign Affairs Minister Abdulla Shahid recently toured and met with senior government officials from four countries taking part in the IOIG as special envoys of President Solih to garner support for Maldives’ bid to host the next IOIG.

Fantastic! Maldives won the bid to host #IOIG2023. Let’s get to work to host the best games ever. Let’s build on the achievements of our great heroes of 2019. Warmest welcome to our sisters & brothers from Seychelles, Mauritus,Madagascar, Comoros, Réunion & Mayotte to our shores! pic.twitter.com/WeBbrLxM3k

The two ministers visited Seychelles, Madagascar, Mauritius and Comoros and presented a letter from President Solih to the Head of State of each of the countries.

Submitting the Maldives’ bid to host the IOIG 2023, Sports Minister Mahloof said the IOIG had a special place within the hearts of Maldivians. He noted that it was the first international sporting competition Maldives ever participated in, and that the Maldivian national football team scored its first goal in an international competition at the IOIG.

He said Maldivians had been crossing the ocean to take part in the competition for over 40 years, and had never skipped a competition.

He said that it was about time Maldives got to host the IOIG at its own soil.

Alhamdhulillahi.After months of hard work we’ve won the bid to host the 2023 IOIG.Thanks to Pres @ibusolih,FM @abdulla_shahid, @AhmedMarzooq,MOC & sports family.
In Sha Allah we’ll have a great games and train our athletes for better results. A huge step for sports in Maldives.???????? pic.twitter.com/kvUAZIhE3P

A team of delegates from the IOIG recently visited Maldives for an assessment following Maldives’ bid to host the IOIG 2023.