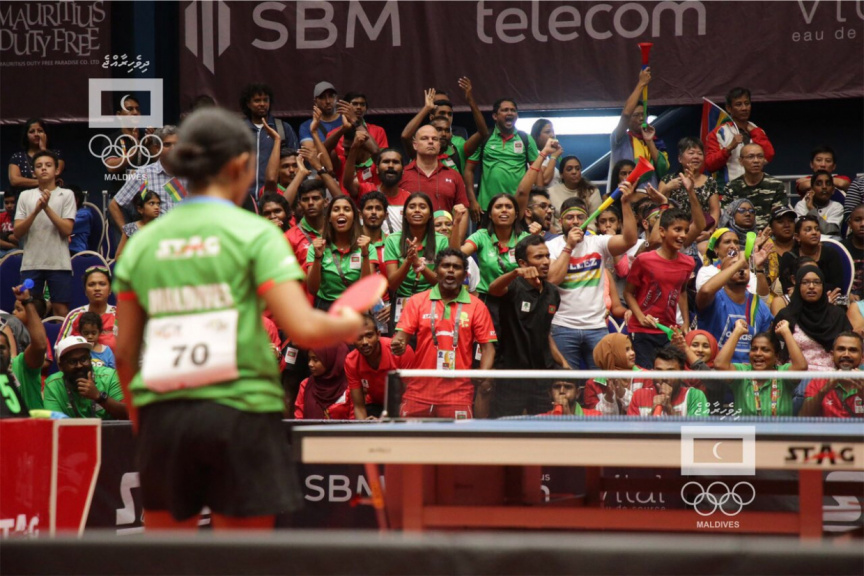 Maldivian table tennis player Aishath Rafa Nazim is cheered on by supporters at the 10th IOIG held in Mauritius. (Photo/MOC)

Sports Minister Ahmed Mahloof has issued invitation to members of the general public to gather at the Republic Square to welcome the Maldivian contingent at the 10th Indian Ocean Island Games back home on Monday.

The Maldivian contingent which took part in the 10th IOIG in Mauritius achieved the biggest success at an international sporting competition in nation’s history with 15 medals.

The athletes are scheduled to arrive in Male’ City at 4 pm on Monday.

Sports Minister Mahloof has invited members of the general public to gather at the Republic Square to welcome the athletes back home.

“I invite everyone from children to the elderly to gather at the Republic Square at 16:00 tomorrow to welcome the award-winning athletes,” tweeted Mahloof this Sunday.

Mahloof has also asked the members of the public to wear colors of the Maldivian national flag when they come to Republic Square.

Maldives, at the 9th IOIG held in Reunion Island in 2015, targeted 10 medals and won nine medals. The Maldivian contingent, this time around, targeted for 15 medals and successfully reached its target.

National stadium to be closed, fixtures in Hulhumale'