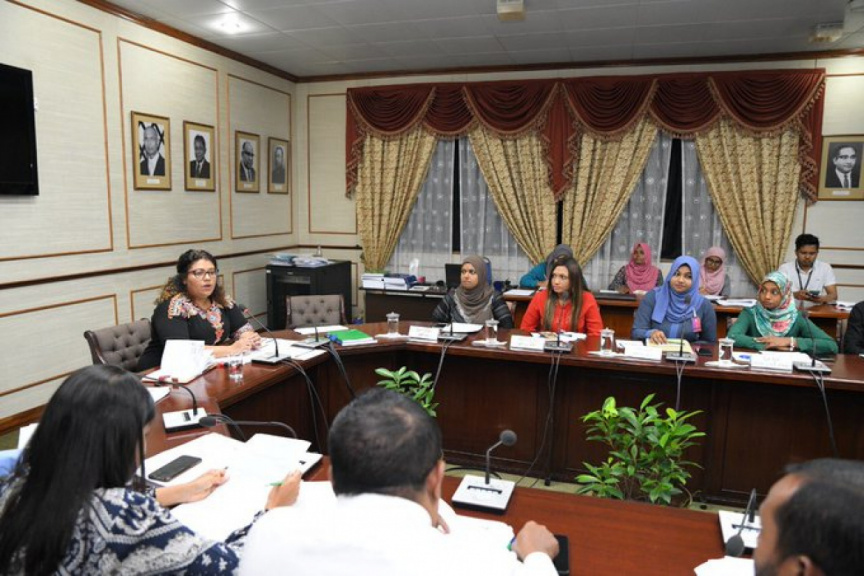 Hinnavaru MP Jeehan Mahmood chairs over the Human Rights and Gender Committee's inquiry into the brutal rape of a toddler on January 18, 2020. (Photo/People/s Majlis)

Parliament’s Human Rights and Gender Committee had decided to summon senior officials from the Education Ministry over the sexual assault of a four-year-old preschooler at Galolhu School by a female caretaker who worked at the school.

During a convening of the Committee held today – Committee’s Chairperson, Hinnvaru MP Jeehan Mahmood proposed that stakeholders in the case be summoned to the Committee for questioning.

On this note – Jeehan has proposed to summon senior officials from Maldives Police Service, the Education Ministry and Gender Ministry. Jeehan’s proposal was accepted by the remaining members of the Committee – following which they had decided that the aforementioned group of people would be summoned to the Committee for Wednesday.

“So if I have your approval – I am deciding that representatives from Education Ministry, Maldives Police Service and Gender Ministry be summoned for Wednesday’s meeting,” MP Jeehan had said.

Speaking further at today’s meeting – MP Jeehan said that the Committee will request the Human Rights Commission of the Maldives (HRCM) and Children’s Ombudsperson’s Office in writing to monitor the investigation of this case.

She also added that a lot of work needs to be done to ensure that schools are a safe place for children.

A motion was also submitted to the Parliament today by PPM’s Deputy Leader, Naifaru MP Ahmed Shiyam urging the government to conduct a full investigation of the case and ensure the safety of school students.

Galolhu School installed CCTV cameras inside the premises and suspended all female caretakers in the wake of the sexual assault of a preschooler at the school by a female caretaker yesterday.

Whilst investigation on the case is still underway by the Police – the specific caretaker who was the perpetrator is currently unclear.

There weren't any CCTV cameras installed at the school when the incident took place.