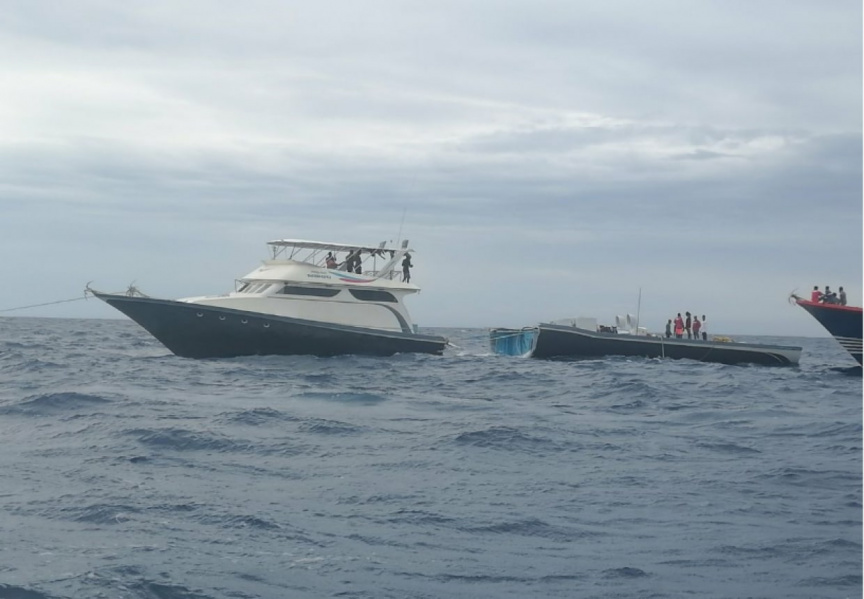 The boat 'Moahiri' receives assistance after breaking in half amid bad weather on July 3, 2021. (Photo/MNDF)

The boat ‘Moahiri’, which was fishing with 25 crew members 8.95 nautical miles off GA. Dhevvadhoo, when it broke in half at the middle in early Saturday morning.

Maldives National Defense Force (MNDF), too, confirms ‘Moahiri’ – a fishing boat from Hithadhoo in Addu City – broke in half.

“We were near a reef, but headed to an island which could offer better protection when the waves rose too high to allow us to remain there. To and island called Girihutta. The boat dropped with a wave and broke in half,” he said.

The head fisherman said he estimates the incident took place around 06:00-6:30 am.

He said that no one was injured in the incident, but expressed unhappiness that the first boat to reach the scene made excuses and left without providing the stranded fishermen any assistance.

“The first to come here was another boat. They came and left. We asked them to pick us up. They responded with some talk about filling some forms. It has to be done according to procedure, right?” he said.

Before the boat which refused to provide assistance left the area, another boat ‘Daisy View’ reached the scene and assisted the stranded fishermen.

The head fisherman said both ‘Daisy View’ and an MNDF Coastguard boat remain at the scene.

“MNDF arrived a bit later,” said the head fisherman. “They arrived around 9 am.”

He said that the Fisheries Minister personally called to check on the wellbeing of the fisherman following the incident, and that both ‘Daisy View’ and the Coastguard are assisting.

MNDF said the authority received report of ‘Moahiri’ boat breaking in half amid bad weather conditions at 07:11 am, and that the MNDF Coastguard Southern Area Squadron is responding to the incident.

Special envoy to monitor May 6 probe arrives in Male'