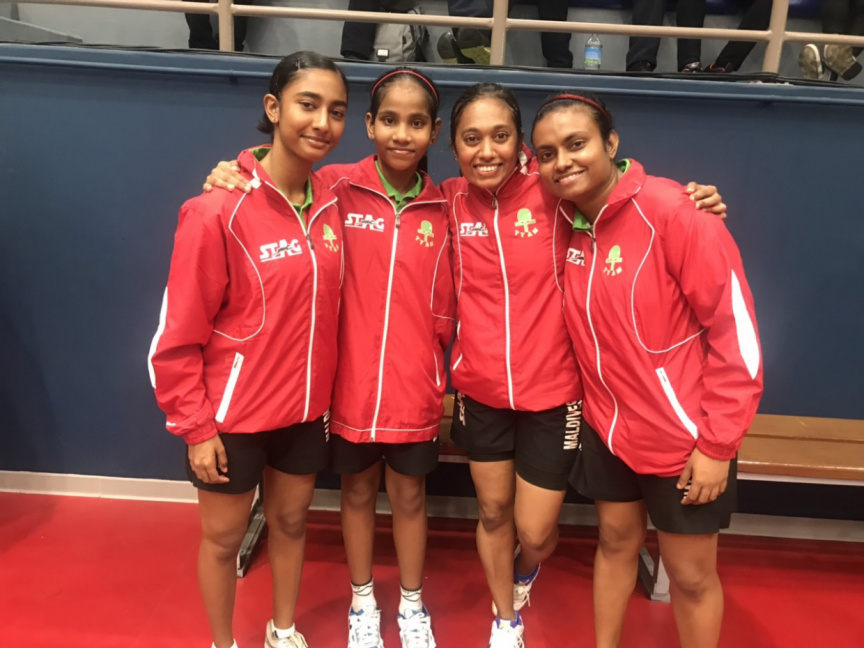 Maldivian Women’s table tennis team has defeated Madagascar to reach the finals in the ongoing Indian Ocean Island Games in Mauritius. The Maldives qualified to the semifinals as the number one in the group and won the game over Madagascar in the semifinals by 3-1. The next finalist will be the winner of the match played between Mauritius and Reunion.

Maldives had won the bronze medal in the table tennis event of the 2015 IOIG games held in Reunion. Hopes were high for the young Maldivian team after the closely won matches with Mauritius and Madagascar who were the best-ranked teams in the tournament.

The first game of the semifinal was played by Aishath Rafaa Nazim who won the game in three straight sets of 12-10, 11-6 and 11-4. The second match was played by Dheema Ali who also won in three straight sets of 11-7, 11-6 and 11-4. However, Maldives suffered defeat at the hands of Madagascar in the third game when the experienced player Mueenaa Mohamed lost two sets after winning the first set of the match. The tiebreaker was won by Dheema Ali who won the match 11-8, 11-5 and 11-6.

“Our target is the gold medal and there is no reason why we can’t do it. We have already defeated the reigning champions in the group stages. This is the result of a lot of effort made over a long period of time,” said Coach Ibrahim Shiuree of the Women’s team. He stated that the remaining energy and focus of the team will be on the final match.

President Ibrahim Mohamed Solih also visited to view the team’s match along with Sports Minister Ahmed Mahloof and Foreign Minister Abdulla Shahid who conveyed their support and encouragement to the team.