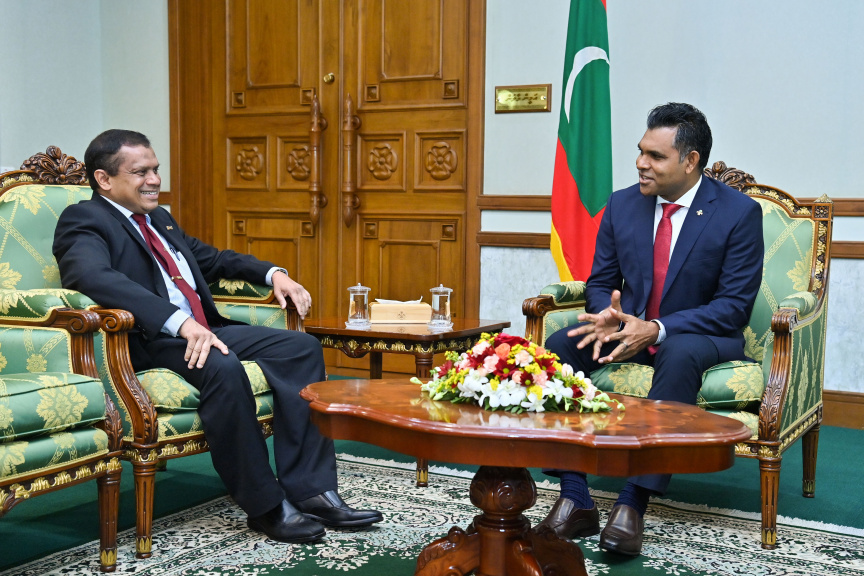 The discussions took place during a courtesy call by Sadiq on Faisal at the President’s Office on Monday.

Speaking at the meeting, Faisal emphasized the strong relations between Maldives and Sri Lanka, and thanked the Sri Lankan government for continued support to Maldives.

He also noted the strong people-to-people bonds that exist between the people of the two countries.

At the meeting, Faisal expressed hope that the Sri Lankan government would consider easing visa arrangements for Maldivian students, which he said would provide significant relief for Maldivian families residing in Sri Lanka.

Both Faisal and Sadiq discussed ways to expand relations between Maldives and Sri Lanka, especially in investment and trade.

Other topics discussed at the meeting included expanding the fisheries cooperation between the two countries and supporting Sri Lanka to alleviate its economic challenges.

They also discussed the exchange of technical and professional expertise between the two countries.

At the meeting, Faisal spoke about the commitment to establish a ‘loss and damage’ fund inked at the United Nations Climate Change Conference (COP27) to compensate vulnerable developing countries for the losses and damages they face as a result of climate impacts.

He also spoke about the efforts by the Maldives on global forums to raise awareness about the financial strain and climate vulnerabilities faced by Small Island Developing States (SIDS).

The fund will benefit the Maldives, Sri Lanka, and other climate-vulnerable countries, he said.