MP Rozaina: Supermajority given to cooperate with government 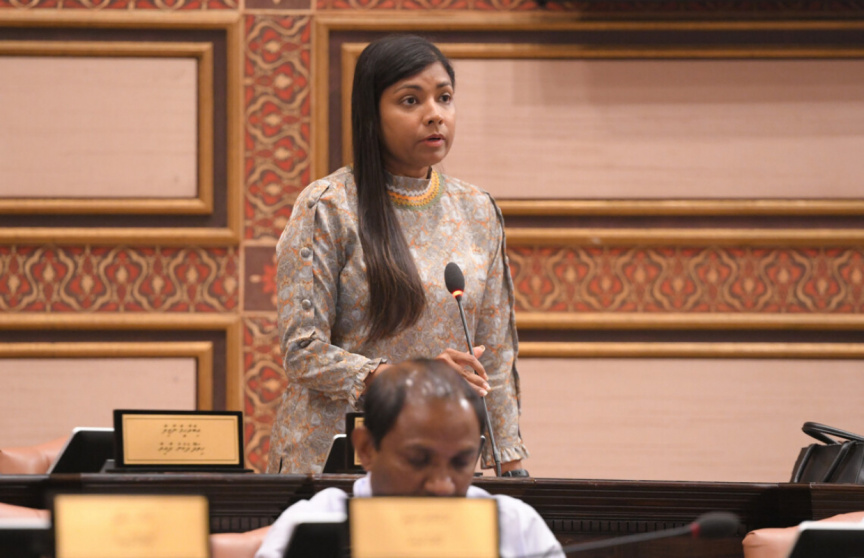 Addu City Meedhoo MP Rozaina Adam has stated that the parliament’s supermajority was given to Maldivian Democratic Party (MDP) to cooperate with the undertakings of the government.

Rozaina, a member of MDP, made the remark at today’s parliamentary sitting during the floor debate on Company’s Act Bill – in response to criticism targeted towards the Economic Ministry and the government by Central Henveiru MP Ali Azim, another MDP member.

In this regard, she said that the current administration’s Economic Ministry is running extremely efficiently – adding that the work of the Ministry is also beneficial to the people.

She stressed that businesses have been able to recover from the losses incurred by the COVID-19 pandemic and revert back to normal operations due to the tireless efforts by the Economic Ministry.

“The result of all of this is businesses having the opportunity to resume their operations upon the reopening of the borders. Resorts were able to resume operations right away because of many such efforts,” she detailed.

Rozaina alleged that Azim was criticizing the government over his loss in MDP’s parliamentary group leader elections.

“Not being elected for a post is not a reason to get up and criticize the government here every morning,” she added.

Speaking further, Rozaina said that supermajority in the 19th parliament was given to the main ruling party in the government coalition in order to cooperate with the efforts by the government to fulfill its electoral pledges. She added that it was the opposition’s responsibility to make the government answerable.

With reference to this, she said that opposition members and government members should not interchange their roles.

Rozaina said that what is observed at the parliament today is MDP members criticizing the strong points of the government in a move to confuse the public.

“Members representing the government are not to stand up and criticize the government’s undertaking by lies and deceit in front of the public. There are individuals that have been sent for this purpose by the people,” she added.

Rozaina’s remarks come at a time MDP’s chairperson election has created disagreements between two factions of the party. Verbal arguments at the parliament between the members of two factions have also become common occurrence due to the disagreements.

Watermelon released in quantity to market to cut prices