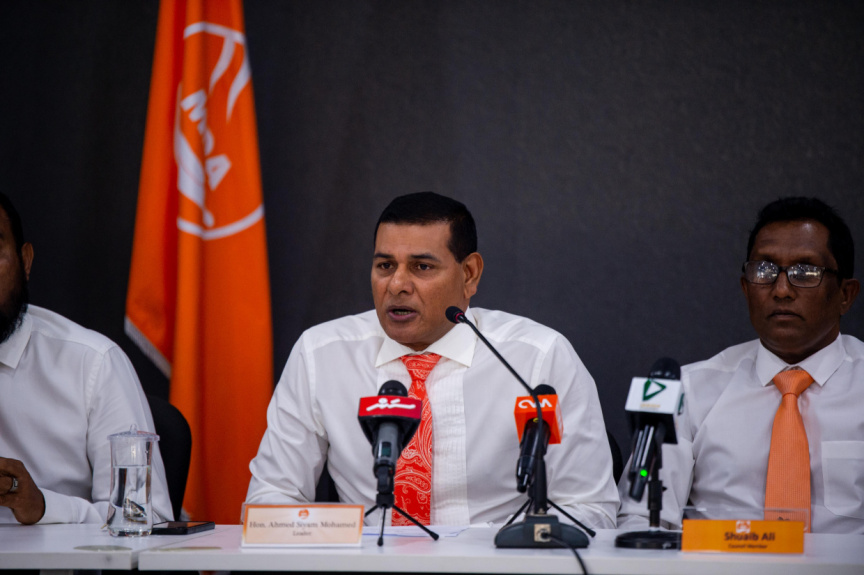 In a press conference by MDA on Wednesday evening, Siyam, the parliamentary representative for Meedhoo constituency, said the person who profited the most from MMPRC corruption becoming the Speaker of Parliament and instructing the investigation into the case showed the extent of abuses in Maldives.

“The Parliament Speaker is the leader of one of the biggest political parties. How would he serve any justice by being on the Judicial Service Commission? You tell me how justice can be established,” he said.

Siyam said that the JSC would not have any politicians in an administration the MDA backed.

Nasheed, during the 2019 parliamentary elections campaign, had said that he played a key role getting former Vice President Ahmed Adeeb Abdul Gafoor – convicted of involvement in the MMPRC corruption – appointed as a government minister.

“I have been unable to explain this clearly because of my own involvement in this,” said Nasheed.

Nasheed also said that Adeeb had been a “worm” he planted within former President Abdulla Yameen Abdul Gayoom’s administration.

“I felt that given I had the opportunity to plant such a good worm inside that Cabinet, and that we needed to plant a good worm to shake up President Yameen’s administration. That’s what I have always believed,” he said.

Nasheed admitted that he asked Kendhikulhudhoo MP Ahmed Easa to vote against the MDP whip-line to deny Adeeb parliamentary approval.

MP Siyam: Education must be free up to master’s degree