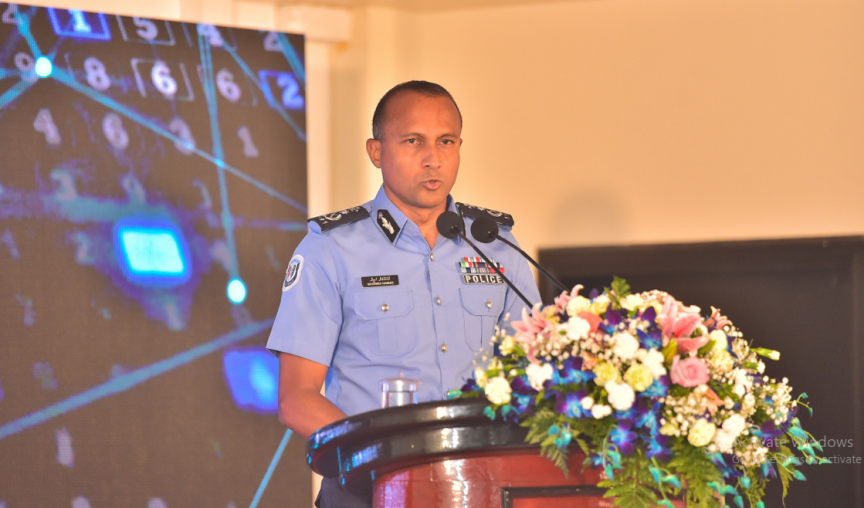 The Commissioner of Police Hameed speaking at the ceremony held to inaugurate body-worn camera.(Sun Photo_

The Commissioner of Police Mohamed Hameed on Sunday stated that the body-worn cameras will play a vital role in building public trust towards the Police.

Speaking at the ceremony held at Iskandhar Koshi to introduce body-worn camera’s CP Hameed said that this would aid the effort of the Police to reduce the fear due to crimes and would help gather the evidence needed for the investigation.

Noting that the cameras would aid in bettering the standards of Police work, he added that it has facilitated in reducing the number of complaints regarding Police misconduct, thereby increasing the people’s trust.

As per the CP, this would also play an important role in holding officers responsible, as well as help, negate false accusations targeting the Police.

Speaking about previous occasions where videos of officers were taken during incidents, CP Hameed said that with the camera’s, now the situation will be seen from the officer’s perspective as well.

Additionally, CP said that with the camera’s, during interactions, criminals would hesitate in disobedience and act violently towards the Police.

He stressed that the cameras would bring major changes to Police work.

Speaking in this regard, CP noted that though Maldives is just starting to make use of body-worn camera’s, other countries have been making use of them for years now.

“Although the project was included in the budget for 2020, with the state income dropping due to the global pandemic COVID-19, finances had to be cut. Hence there were some delays in getting started with this project.”

The body-worn cameras were inaugurated in Male’ and Addu City with 200 cameras. This was after establishing regulations and training officers for it.

CP Hameed revealed that they were working to get 1,200 more cameras in the near future, to be able to use them in all areas.

“The regulation stated that all interactions will a civilian must be on record. The regulation also dictates things such as the significance of footage and in which scenarios it can be shown.”

Moreover, he revealed that the cameras will be used in traffic petrol, drug-related operations and other specialist operations.

The CP added that although the plan is to use in protests and other gatherings, it might not be used on all such occasions as the project has commenced with only 200 cameras.