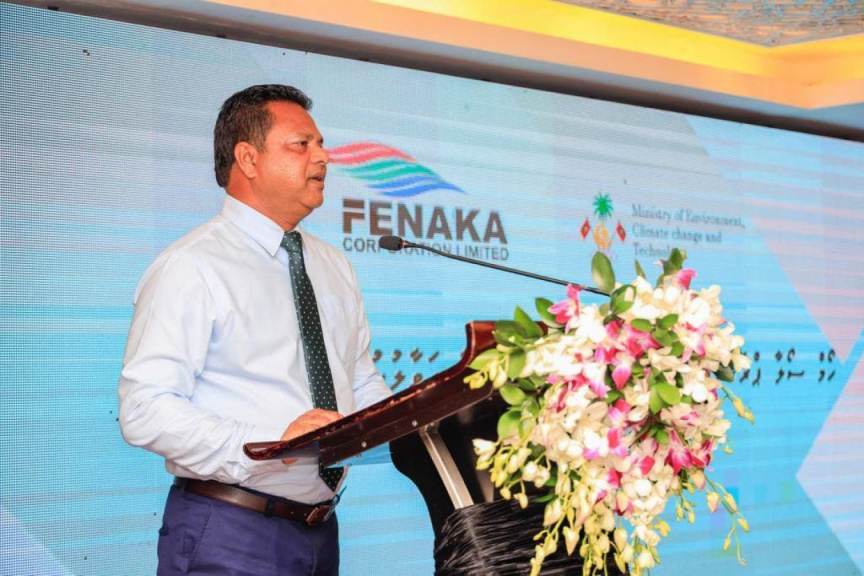 Fenaka Corporation's Managing Director Ahmed Saeed on Thursday stated that the Home Solar Programme will be financially beneficial to the public.

He made the remarks during the ceremony held to officially hand over the project to Fenaka Corporation.

Speaking in this regard, Saeed stated that Maldivian Democratic Party (MDP) has always planned and executed things in a way that would lighten the public financial load.

“Until 2007, there has been a little bit of solar power work done through the government in Maldives. In 2008, with the new MDP government, it was done in a very broad manner.”

He went on to say that due to the work done by former President Mohamed Nasheed to create renewable energy, we now create megawatts of electricity through renewable energy.

Additionally, Saeed said that although at the time solar energy was not created with the intention of lowering electricity costs, it did result in some decline in the amount of money spend by the government on fuel.

Talking about the project handed to Fenaka in the ceremony, Saeed revealed that under the project, the company will bring to the market and do the installation work for 2-5 megawatts solar panels.

“Under the Home Solar Program commenced today, for sure, at least a 100 Maldivian families or households will get this.”

Saeed said that this was just the beginning of this programme and that the government intends to expand this project on a much wider scale. He also said that Fenaka aims to have moved 75 percent of all the power generated in each island they provide services, into renewable energy by the end of 2023.

The project was taken by the company with the government investing MVR 20 million into it. Under this project, funds will be released to install solar panels on households.

According to Fenaka, to commence the project, 1000 households will get solar panels installed. Panels will be installed by Fenaka powerhouses on each island after inspecting the conditions of the roof as well as the amount paid by the household for electric bills.