Rizvi: Airport has increased Hoarafushi’s monthly income by half a million 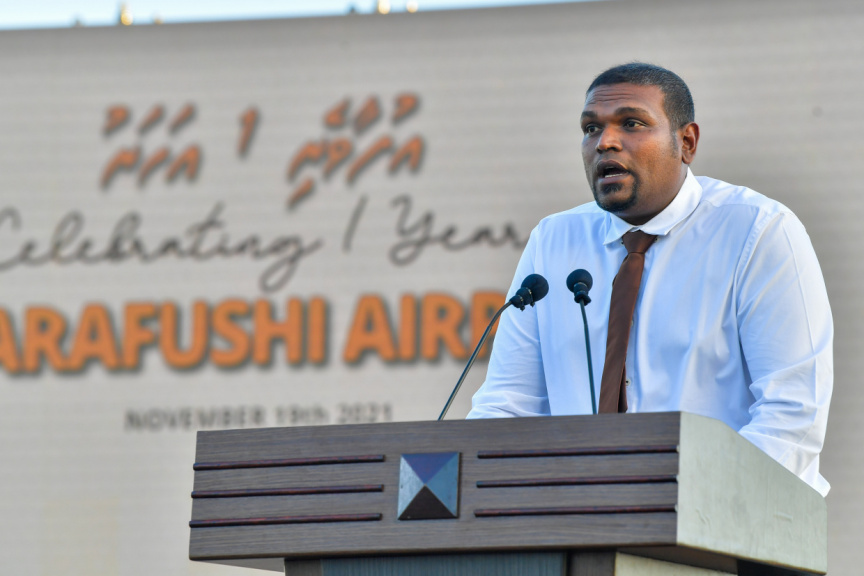 Regional Airports Company Limited’s Managing Director Mohamed Rizvi states the airport in HA. Hoarafushi has increased the island’s monthly income by more than half a million.

He made the remark at the function held on Friday evening to mark Hoarafushi Airport’s one-year anniversary. Vice President Faisal Naseem was the chief guest at the function.

Rizvi said that scores of people have left the hectic life in Male’ City and migrated to other islands for employment. And that many who left their family and loved ones to find employment have returned home to their island.

“The airport has created multiple jobs in Hoarafushi, and with the jobs, has increased the island’s monthly income by more than half a million,” he said.

Rizvi said that the significant change to Hoarafushi’s economy has been beneficial to the people, and has brought an end to the perilous journey across the Gallandhoo Sea.

“In the one-year since the Hoarafushi Airport opened, some 10,000 people have travelled with ease. Countless patients have received healthcare without needing to cross the high waves of the sea. Overall, this has made life easier for the people in this region,” he said.

Rizvi said that the airport embodied the current Maldivian administration’s vision for a decentralized country.

“The Hoarafushi Airport is a clear picture of the current administration’s efforts to achieve its biggest goal – a decentralized Maldives,” he said.

Rizvi said that the Maldivian government envisions great things for Hoarafushi. He said that the airport was certified last October, and that the work on the lights will be complete and the airport open for night landings next year.

Also speaking at the function, Transport Minister Aishath Nahula said the airport has brought social and economic equity to people in northern Maldives.

Nahula described the airport as a main doorway that opened more opportunities for employment without gender discrimination.

Meanwhile, Hoarafushi MP Ahmed Saleem said that the airport has reduced the cost of travel for Hoarafushi residents.

“The truly sincere leaders are ones who stand by their words and do hard and sincere work to realise those words,” he said.

Saleem described President Solih as a “People’s President” who fulfilled his promises and served the people.