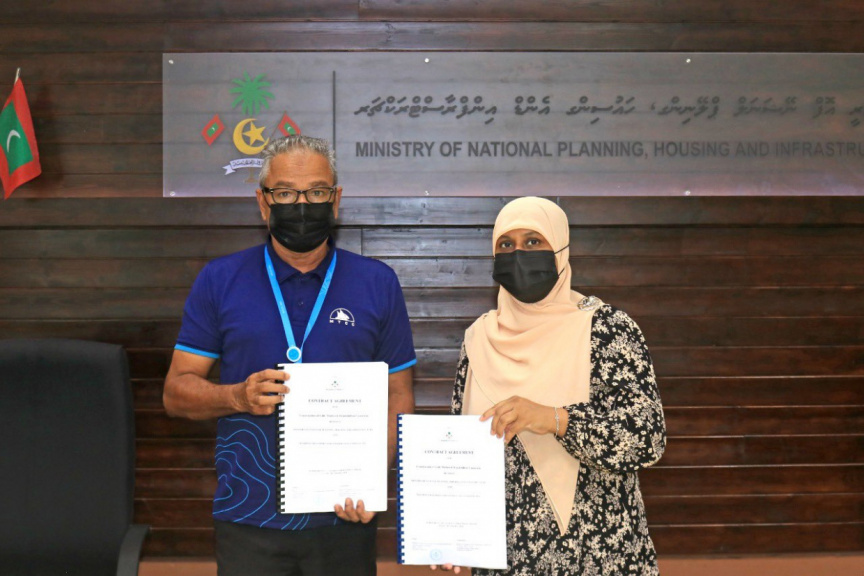 Maldives Transport and Contracting Company (MTCC) has been awarded a project to build a causeway between Madaveli and Hoadedhoo – two neighboring islands in GDh. Atoll.

The contract was signed by Planning Ministry’s Permanent Secretary Zeeniya Hameed and MTCC’s COO Shahid Hussain Moosa in a ceremony at the Planning Ministry headquarters in Male’ on Tuesday afternoon.

The project is valued at MVR 84 million, and involves building a 223-meter causeway linking Madaveli with the uninhabited island of Haadhoo, and a 160-meter causeway between Haadhoo and Hoadedhoo, as well as construction of a 262-meter road area.

MTCC is required to complete the project within 300 days.

The causeway between Madaveli and Hoadedhoo built in 2016 during former President Abdulla Yameen Abdul Gayoom’s administration was broken off this year. The project had cost MVR 29 million from the state budget.

The reclaimed causeway blocks the flow of water between the islands, where the currents are strong during the monsoon season. This results in the rise of strong waves all around Hoadedhoo as well as over the causeway. While the causeway features three openings along its length to allow water flow, the openings are reportedly too small to be effective.

Parliament’s Environment and Climate Change Committee, which conducted in inquiry into the issue, found the causeway was built against recommendations of Environmental Protection Agency (EPA).

The Parliament passed the committee’s report, which called for compensation from negligent parties over the environmental damage, as well as the inability to properly use the causeway.