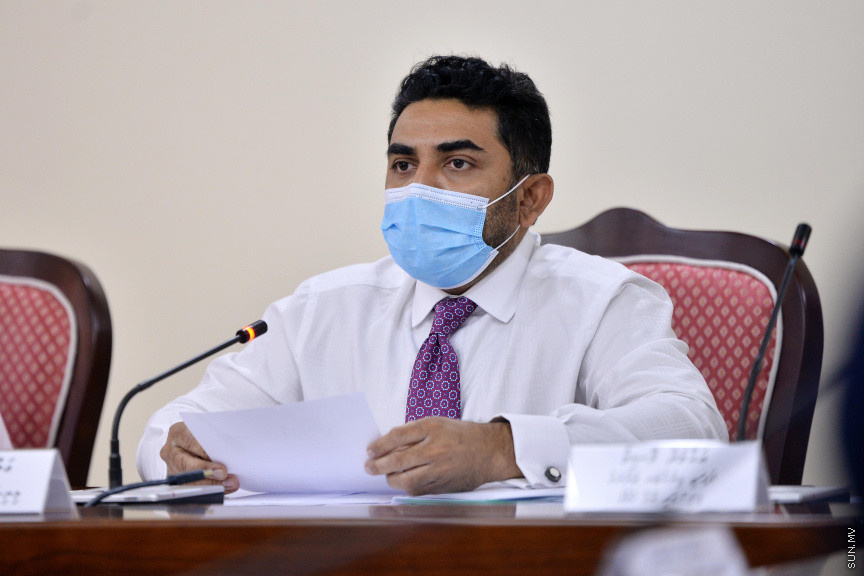 Sun has been informed through a credible source Ameen won the vote with a three-vote difference.

The parliamentary group of main ruling party, MDP convened for an emergency meeting on Tuesday evening to make a decision on submitting a no-confidence petition to the Parliament to dismiss Ameen in response to the corruption allegations against him.

Sun has been informed the emergency meeting was attended by 58 parliamentarians. 27 parliamentarians voted that they lacked confidence in Ameen, which fell just three votes short of the 30 votes required to pass the motion.

Some of the parliamentarians had abstained from the vote, and the exact number of parliamentarians who voted in favor of keeping Ameen in the office of Health Minister remains unclear at this point.

Sun has been informed that some MDP parliamentarians are working on submitting a no-confidence motion against Ameen to the Parliament regardless of the failure of the attempt to pass the no-confidence vote from within the MPD parliamentary group this Tuesday.

Ameen is accused of corruption and fraud in connection to the award of a government contract to procure 75 ventilators in an effort to improve the capacity of the Maldivian health system to treat COVID-19 patients who require critical care.

Anti-Corruption Commission (ACC), which conducted an investigation into the case, requested the Prosecutor General’s Office for charges against 11 senior Health Ministry officials, including Ameen, last week.

However, the Prosecutor General’s Office announced the decision to decline to press charges earlier this Tuesday, stating that there isn’t “even close to enough evidence” to prove criminal charges against the officials.

Despite the decision of the Prosecutor General’s Office against pursuing criminal charges in connection to the case, ACC has stated it will re-examine the case in collaboration with Maldives Police Service.

The allegations against Ameen stems from irregularities highlighted in a compliance audit on COVID-19 related spending by the Health Ministry – primarily a MVR 34.50 million contract to Dubai-based Executors General Trading to procure 75 ventilators – released by the Auditor General’s Office in August.

While Ameen and officials from National Emergency Operations Center (NEOC) previously stated that the contract for procurement of 75 ventilators was awarded to Executors General Trading at the recommendation of the World Health Organization (WHO) office in Male’, the audit report states that no official recommendation was ever made.

The audit report shows the Health Ministry paid MVR 30.91 million, which made for 90 percent of the total payment, to Executors General Trading as an advance, without obtaining an advance guarantee or a performance guarantee.

The company has yet to deliver the 75 ventilators.

Ameen: Ministry did not steal, acted in good faith

'Will push for impeachment, even if against whip-line'