Fishermen protest in Kooddoo over delay in payment 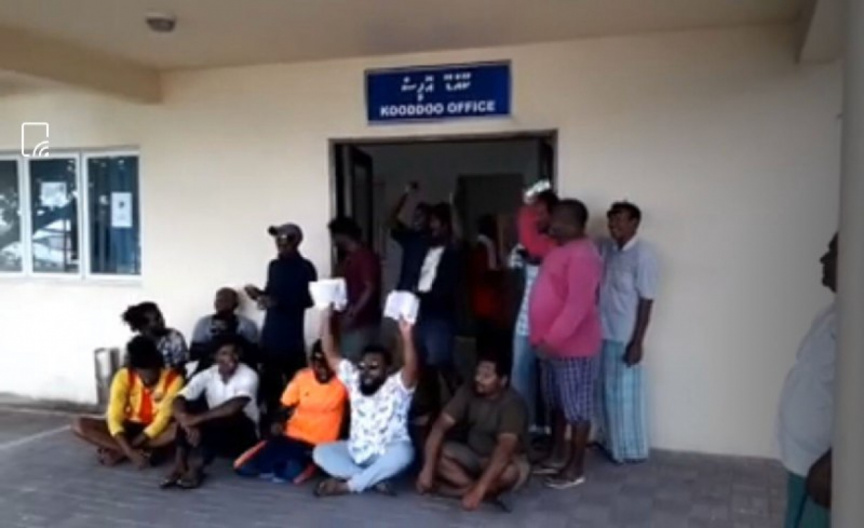 A group of fishermen have launched a strike in G.  A. Kooddoo to protest over the delay in payment for their catch.

The strike began at Kooddoo on Saturday morning, and is being partaken by a large number of disgruntled fishermen.

One protester said that Maldives Industrial Fisheries Company (MIFCO) bought fish from his boat ‘Kashavattaa’ a month back, but has yet to provide payment.

He said that 12 unpaid bills for sale of fish totaling approximately MVR 1 million.

“We came here because we haven’t received the money. We have been on this for three days now,” he said.

Another protester who spoke to Sun said that they had previously expressed their concern over the delay in payment, and were promised they would receive the payment on Sunday last week.

“The officials said the constraint was due to COVID. What we are saying is, don’t buy fish from us if you can’t pay due to COVID. If you buy from us then you need to pay us. This is our livelihood,” he said.

The police said they are operating at the scene, and that the strike was peaceful.

The police said they are negotiating with relevant parties to produce a peaceful resolution to the issue.

The protesters have called for the resignation of the Fisheries Minister and MIFCO’s senior officials. They are refusing to leave Koodoo until they are paid.

Fauzi said that fishermen were issued MVR 15 million in payments on August 2, and have approximately MVR 33 million more in payments due. He said that MIFCO will begin issuing pending payments on Sunday.

Fauzi said that MIFCO has a capacity of 300 tons of fish per day, which is approximately MVR 6 million in value. He said that the company was facing major cashflow constraints with having to export fish at below the purchase price due to the significant drop in demand for fish in the global market due to the coronavirus pandemic.

Kooddoo’s expansion: Mins to be questioned over delays

6 arrested in drug operations in Male’