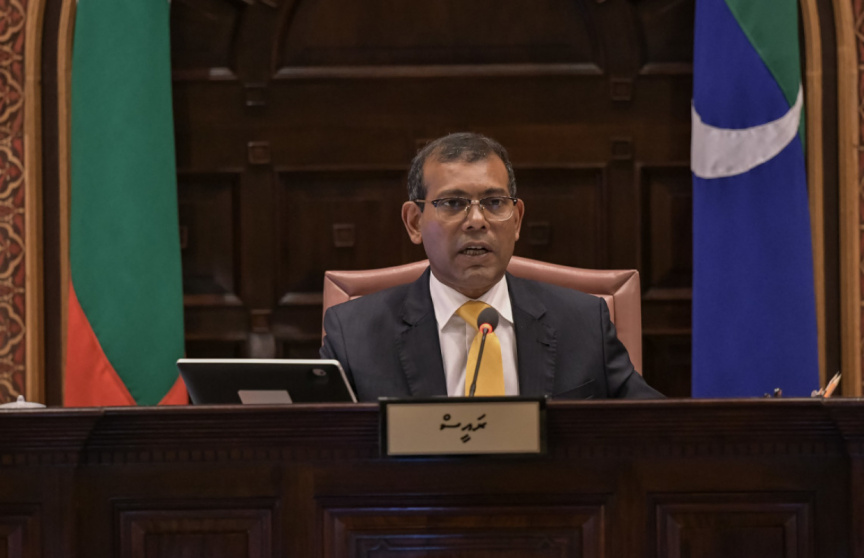 The Judiciary Committee has received approval from the Speaker, former President Mohamed Nasheed to proceed with the impeachment motion it has voted in favor of initiating against the Prosecutor General Aishath Bisham.

Article 210 of the Parliament’s Standing Orders establishes that a motion to impeach a member of an independent institution may be lodged with the Parliament in accordance with the Maldivian Constitution.

Such impeachment requests must be announced by the Speaker, after which it will be forwarded straight to the relevant parliamentary committee for evaluation, without any debate.

The parliamentary committee charged with evaluating the impeachment request is required to inform the Speaker if it decides there are grounds to consider an impeachment.

Speaking at the parliamentary sitting this Wednesday morning, Nasheed said the Judiciary Committee members, as well as other parliamentarians, were in agreement that crimes pertaining to corruption, embezzlement and terrorism had been out of control in Maldives over the past year, and that the prosecution of such crimes had proved inadequate.

Nasheed said that he therefore found there to be grounds to warrant Bisham’s impeachment, and instructed the Judiciary Committee to proceed with the motion.

With Nasheed’s announcement, the impeachment request had been sent back to the Judiciary Committee, which, if it votes in favor of impeaching Bisham, will present its recommendation to the parliamentary floor – which will decide her fate with a no-confidence vote.