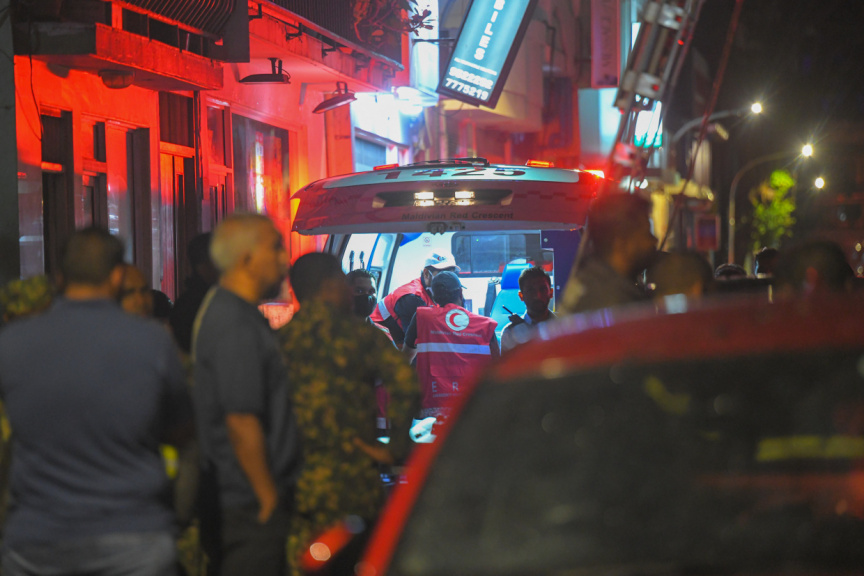 Firefighters respond to a fire in M. Nirufehi on November 10, 2022. (Sun Photo/Shuaib Mohamed)

33 people remain in temporary shelters in connection in the wake of the deadly fire in Maafannu district of Male’ City last week, according to the National Disaster Management Authority (NDMA).

The fire broke out in a car repair garage in M. Nirufehi, located near the Maaveyo Mosque, around 12:30 am Thursday. The garage is located on the ground floor, while the first-floor housed cramped accommodation for migrant workers.

10 migrant workers in the accomodation were killed, and one critically injured in the fire - the worst the Maldives has seen in recent history.

In a statement Sunday, NDMA said there were currently 33 people affected by the fire living in temporary shelter. They include 15 migrant workers; eight males and seven females. 14 of them are Indians and one is a Bangladeshi.

The remaining 18 are Maldivians; 12 females and six males. They also include six children.

NDMA said that the Education Ministry and schools are providing support to facilitate the resumption of studies of the school students in temporary shelters.

Meanwhile, Maldivian Red Crescent and Gender Ministry is providing psychological support to the people affected by the fire.

The Maldivian Red Crescent is also supporting the migrant workers rendered homeless in the fire to resettle.

NDMA has spent MVR 135,471.80 to provide humanitarian aid to the affected families.

NDMA added that it has begun damage assessments of the buildings affected in the fire.

Maldives Police Service is coordinating efforts with the Maldivian Foreign Ministry and the Indian High Commission and the Bangladesh High Commission to transport the bodies of the victims back home to their families.