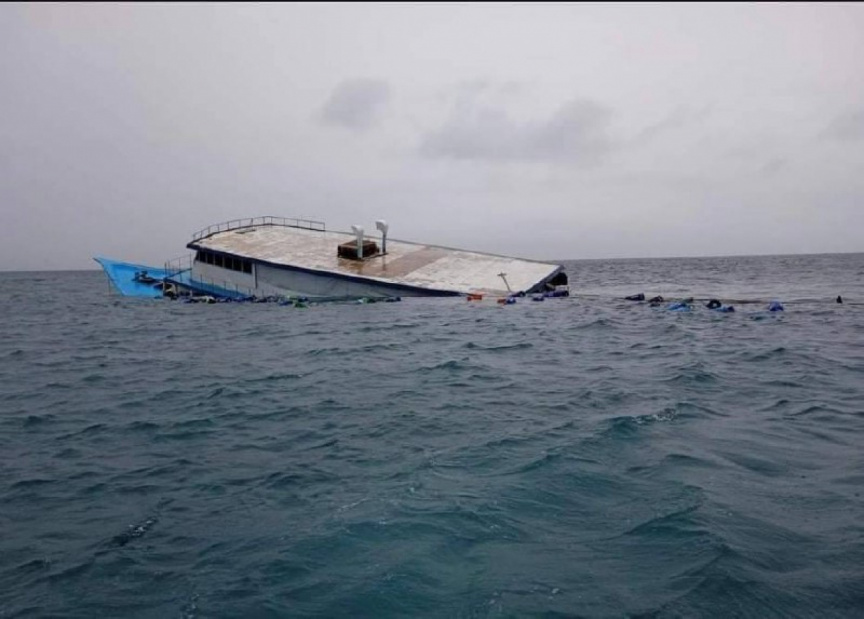 A boat traveling from N. Landhoo to Male' City sinks after wrecking on a reef off K. Gaafaru on August 31, 2022. (Photo/Zaheen Abdulla)

N. Landhoo has faced a shortage of staples due to a boat registered to the island carrying passengers and cargo sank on Wednesday, after it ran aground the K. Gaafaru reef.

The boat was travelling from Male’ City to Noonu Atoll when the incident took place.

Many lost their processions as well as cargo that was carried to the island.

Speaking to Sun, council member of Landhoo Ibrahim Razzan said that the boat was carrying the amount of staple goods needed for the island, hence, they are currently facing a shortage due to the incident.

“Right now, most of the shops on the island are out of staple goods. Most shops have empty shelves.”

He went on to explain that there were two boats that usually transport goods, but one of them was recently taken ashore for some repairs.

“The thing is, since one boat is missing, the number of goods brought will also be less. Now after the Landhoo boat incident, pretty much entirely running out of staples.”

Some residents of Landhoo who spoke with Sun said that the shops which have staples left are now rationing it and selling a specific amount per household.

They also revealed that the boat carried motorbikes of three people from the island, and was also bringing over a lakh worth of goods for a shop called ‘Smart Seven’.

“The boat was also carrying a lakhs worth of construction materials that an individual had brought to build their house.’

Videos and pictures of the boat sinking have been circulating on social media. Footage shows numerous gas cylinders on the boat floating around in the sea well.

Only a small fraction of the goods on the boat were salvaged.

A team from the island travelled to the area where the incident took place to refloat the boat.

“They will be travelling to arrive at the site in time for dawn since work cannot be done at night time," said council member Razzan.

Maldives National Defense Force (MNDF) said the incident was reported to the Maritime Rescue and Coordination Center at 10:55 am on Wednesday.

Detailing the incident, a council member from Gaafaru Mohamed Samaan who spoke with Sun said that the passengers on the boat were rescued and safely brought to Gaafaru.

He went on to state that people from Gaafaru had gone to the area to bring people to safety. A total of 40 people were on the boat at the time of the incident, he said.

Additionally, Samaan noted that with assistance from the residents of Gaafaru, accommodation was provided for all those on the boat.

He highlighted the support from the people of Gaafaru in assisting and providing accommodation for all those involved in the incident.

Following the incident, the leader of Maldives Development Alliance (MDA) Ahmed Siyam prayed to grant strength to those who suffered due to the incident.

Man arrested for selling alcohol out of Male’ shop