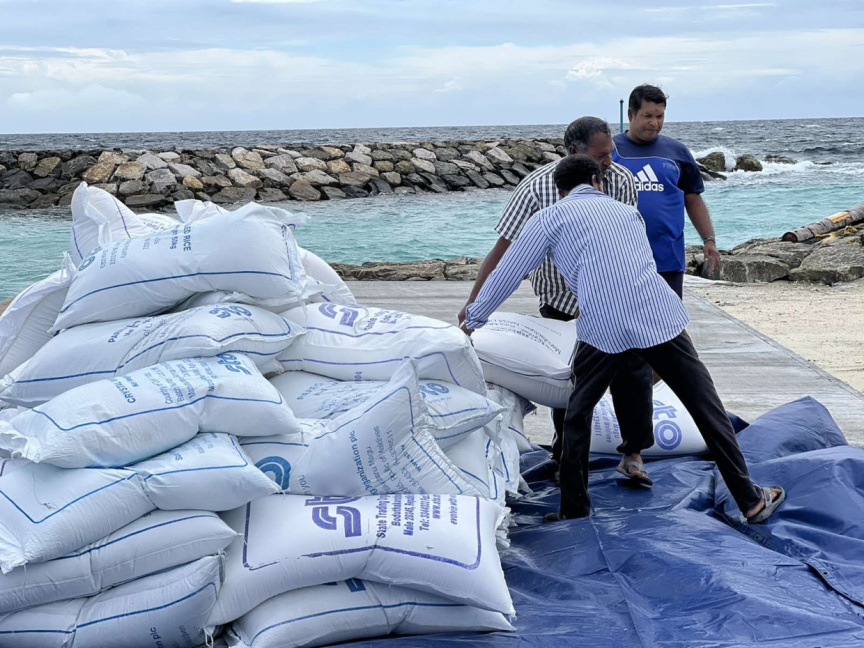 Staple foods have been delivered to N. Landhoo, with assistance from State Trading Organization (STO) and Siyam World, to ease the shortage arising from the sinking of the island’s ‘Landhoo Boat’, after running aground on K. Gaafaru reef that was traveling to Noonu Atoll from Male’ City with abundant cargo aboard.

Landhoo Council President Abdul Azeez Mohamed told Sun on Friday that arrangements for the goods were made by STO, very quickly. He added that the items were delivered to Landhoo on a supply boat belonging to Siyam World Resort in Noonu Atoll.

“We called Siyam World’s management and requested for this (transport of goods) due to the situation at hand arising from the boat’s sinking, and they complied. Much cooperation was received from Siyam World,” he had said.

Abdul Azeez detailed that Landhoo Council has opened the opportunity for residents in need of basic necessities to name note. He added that efforts were underway to deliver staple foods received to those in need.

Apart from ‘Landhoo Boat’, only one other carried cargo to the island. However, the second boat was recently beached for repairs.

Thus when the boat sank on Wednesday – a Landhoo resident had detailed the island facing a staples shortage, with shops rationing the amount of staple foods sold to each house.

The resident also detailed that when the boat sank, it was carrying the motorbikes of three people from island and was also transporting goods worth over MVR 100,000 for a local shop called ‘Smart Seven’.

When the boat sank, it was also carrying approximately 40 passengers. They were rescued by Gaafaru residents who went to the scene, who brought them safely back to their island. Gaafaru Council reported all the passengers were in good health.

Efforts are underway to refloat the boat collaboratively by MNDF, Landhoo and Gaafaru residents.