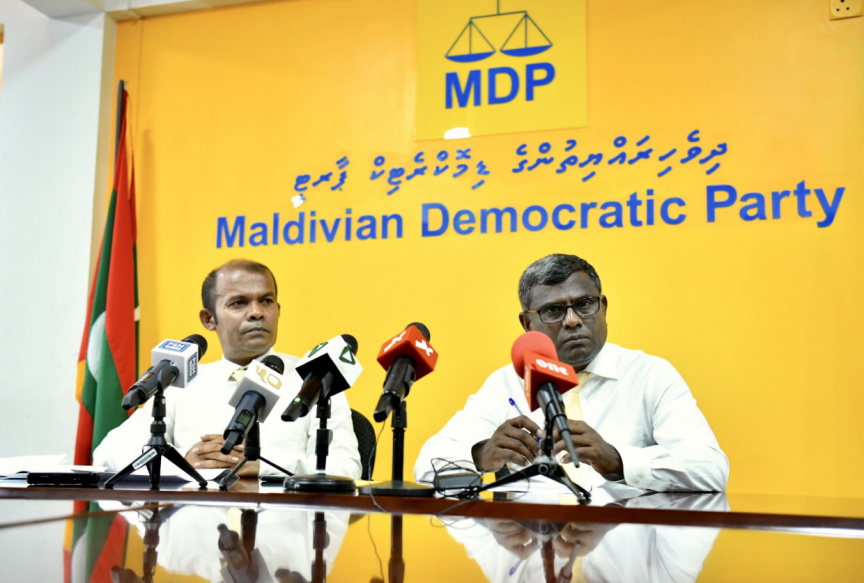 A capture from the press conference held by MDP to brief media on MDP’s congress scheduled for August 19th, 2022. (Sun Photo/Naail Hussain)

Ruling-Maldivian Democratic Party (MDP), on Wednesday, has stated that the party will be selecting a candidate for next year’s presidential election through a primary,

In a press conference held by this morning to brief the media regarding MDP’s congress – Chairman of MDP’s Congress Committee Ibrahim Waheed (Iburey) said that the party will be selecting a presidential candidate through a primary.

However, he detailed no discussions regarding the party’s presential ticket would be discussed during the congress scheduled for this month.

Underscoring that a date has not been set for the primary yet – Iburey said that discussions scheduling the primary will be soon put forth by the party’s Chairperson to the party’s National Council in accordance with the constitution.

He also noted that once a date has been set for the primary, a five-member committee to oversee the election must be formulated by the National Council.

However, he also pointed out that the party’s congress will have the discretion to handover the presidential ticket without going for a primary.

Pointing out that the National Council does not have this decision – Iburey explained that as discussions regarding the presidential ticket is not on the agenda for the congress, the only way a candidate for the presential election scheduled for next year can be decided now is through a primary.

President Ibrahim Mohamed Solih announced his intention to run for a second term in early June.

The presidential ticket will be officially handed over to Yameen at a special ceremony scheduled to take place on August 19th.