Planning Minister: Vinares can be claimed as one of this administration’s projects 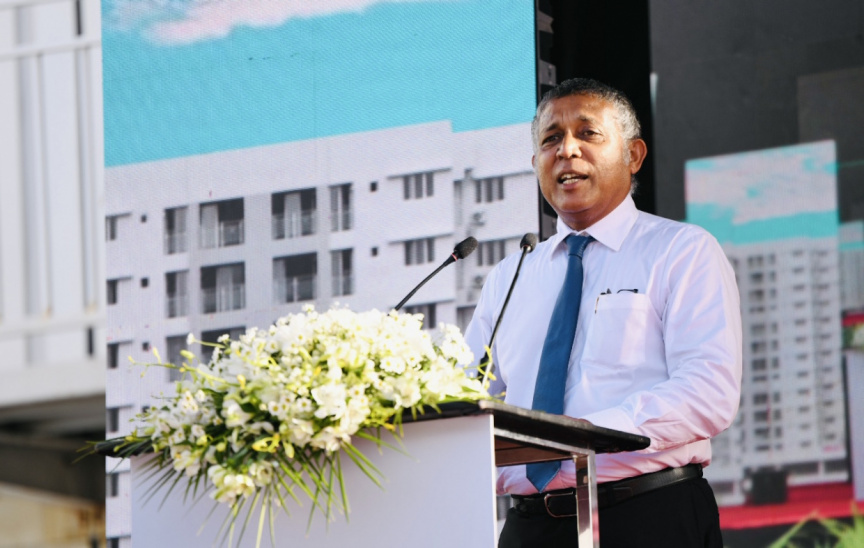 Planning Minister Mohamed Aslam said on Monday that the Vinares apartments developed in Hulhumale’ Phase II could be claimed as one of the current administration’s projects.

He made the remark during the ceremony held in Hulhumale’ Phase II on Monday evening for the official hand over of two towers developed under the project to Housing Development Corporation (HDC).

Aslam said that even the foundation work for the project hadn’t been complete when the current administration took over in 2018.

“When we came to office, the work on the project had barely begun. The foundation of many of the apartments had been incomplete,” he said.

Aslam said the project originated from an agreement signed back in 2009, during the first MDP administration. He said that it had been he himself who had signed the agreement as the Housing Minister at the time.

“I have the right to claim this a success achieved from work done during this administration,” he said.

The project’s contractor, China Machinery and Engineering Company (CMEC)’s first project in Maldives had been a project to develop 1,000 housing units in Hulhumale’, under an agreement signed in 2010.

Its second project had been the development of 796 housing units in the greater Male’ area, and 704 units in four atolls in southern Maldives. The project agreement was signed in 2011.

Vinares was the company’s third project. The project agreement was signed in 2015, during former President Abdulla Yameen Abdul Gayoom’s administration. The project had originally been part of the Hiyaa Housing Project, before the name was changed to Vinares after the current administration took over.

'I have never seen a time of such rapid development'

"Remainder of term President will be opening places"

'No plan of making migrants to Male’ eligible for land'

'Platform incident no cause for bridge project delay'

Applications for land in Male’ to open on June 26