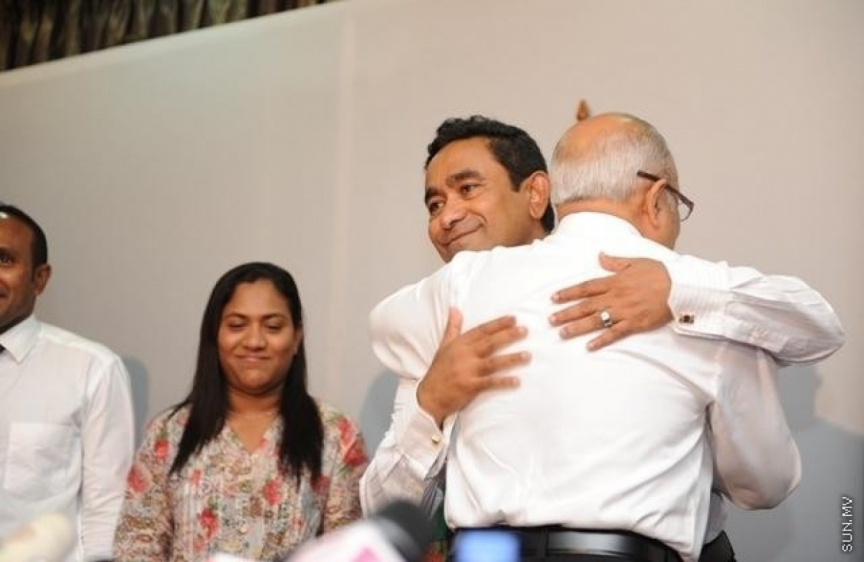 Maldives Reform Movement (MRM) has called on the authorities to investigate former president Abdulla Yameen Abdul Gayoom and take urgent action against him for recent remarks he made that implied he intended to influence the judiciary and jail a number of public officials if he came back to power.

Yameen, the leader of the opposition PPM-PNC coalition, made the remarks during a campaign event for Fathimath Nazima, PPM’s candidate for the Womens Development Committee Vilimale’ constituency by-election, on Tuesday.

He accused his brother, former president Maumoon Abdul Gayoom of being behind the controversial order issued by the Supreme Court on February 1, 2018.

MRM denied the allegation against the party’s leader in a statement on Wednesday.

MRM said it condemned the remarks by Yameen that he would “choose cruelty, influence the justice system, undermine the courts, and imprison judges, heads of institutions, political leaders, and members of the general public for a long period of time, same as he did when he was president.”

The party called on the police and other relevant authorities to investigate the remarks and take necessary action.

MRM said Yameen’s remarks proved his lack of respect for the people, and showed him to be a cruel leader who believed the people to be ignorant.

MRM said that while Yameen claimed the order was issued to overthrow his government, the Supreme Court issued no order on that date that could overthrow the government or undermine its legitimacy.

The party said the order instructed the release of nine political prisoners from arbitrary detention, and the reinstatement of 12 parliamentarians.

MRM said that Yameen’s administration openly refused to implement the order of the Supreme Court, and forced multiple law enforcement officials to act in violation of the law.

Yameen’s administration also declared a state of emergency to avoid implementing the order, literally removed the roof of the Supreme Court, arrested and jailed justices, along with political leaders and activists who remained, said the party.

MRM said that Maumoon was forced to join other political parties and form a coalition against Yameen in the 2018 presidential elections because he failed in his efforts to stop the unlawful acts committed by Yameen’s administration.

MRM said that though Yameen distance himself from the order to arrest and imprison Maumoon, the party found that given the state of affairs at the time, there was no way the decision did not come directly from Yameen himself.

The party called Yameen’s remarks brushing off responsibility for his actions ‘cowardly’.

SIFCO: We didn't run any of the projects on audit'