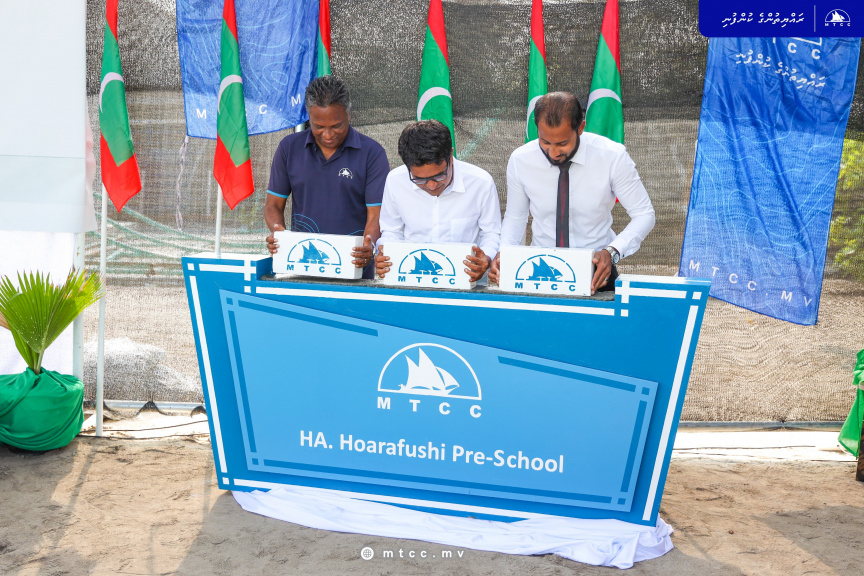 Maldives Transport and Contracting Company (MTCC) has held the groundbreaking ceremony for an international pre-school in HA. Hoarafushi.

The foundation stone of the Hoarafushi International Preschool was laid by Hoarafushi MP Ahmed Saleem (Salle) on Thursday morning. The groundbreaking ceremony was also attended by Hoarafushi Council’s Vice President Ahmed Imdhah, MTCC’s CEO Adam Azim, and other senior officials from the company.

The school is being built as a Corporate Social Responsibility (CSR) initiative by MTCC.

The three-classroom school is scheduled to be complete in eight months.

Hoarafushi Council’s VP Imdhah said inadequate pre-school education in Hoarafushi was an issue of concern for residents of the island.

“The island has been lacking preschool education for a long time. It is provided by private parties to some extent. For this preschool will produce positive changes to the performance of students in the future,” he said.

MTCC said it was working closely with a number of local and international non-profits on the project.

The company said it aims to complete the project as soon as possible, and fulfil the hopes of young children and their parents.

MTCC also said that improving access to education had been part of the company’s culture since its inception, and that the company had conducted various CSR initiatives over the years.

'Buses will soon be accessible with touch of phone'