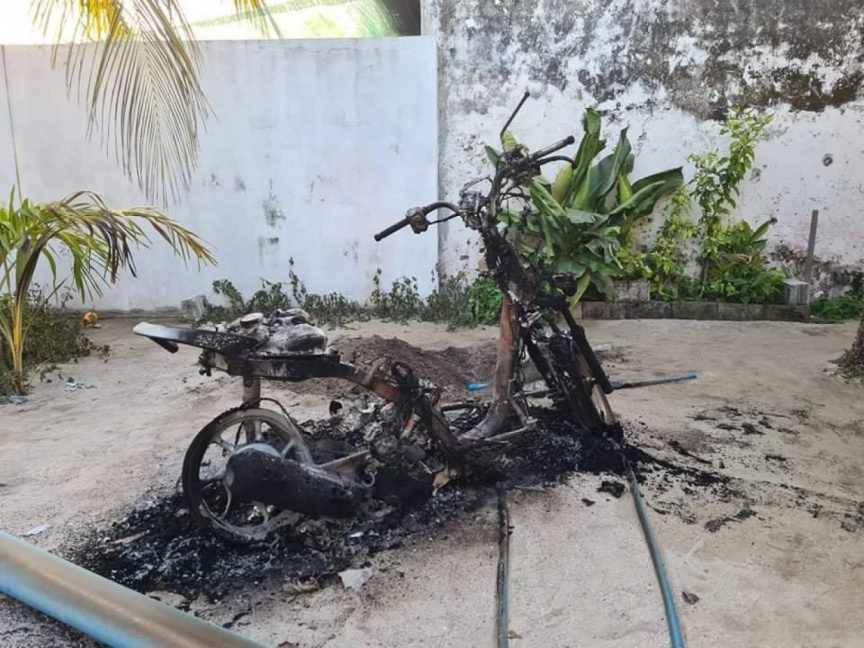 Picture of motorbike belonging to police officer that was torched by a drug dealer the officer tried to stop.

Two people arrested in connection to the torching of a Maldives Police Service officer's bike in N.Miladhoo were released on Friday.

Police arrested three suspects in the case – a 22-year-old, 27-year-old and 31-year-old, who were all taken to Miladhoo Court to make a decision regarding their remand on Friday.

The court ordered to remand the 22-year-old for five days and released the other two.

All of them are Maldivian males.

According to Police, the officer whose bike was torched attempted to stop a drug dealer who was trying to sell drugs.

Following this, the officer was given a warning and later his bike was torched, and was burnt beyond use in the incident.

CCTV footage of the motorbike being torched has gone viral on social media.

The footage first shows the motorbike parked inside a house. Then, an individual whose face is covered comes in, scans the surrounding for people before pouring petrol over the motorbike.

After the individual leaves, two others were seen entering the house and lighting the motorcycle on fire.

Two arrested in Thoddoo for arson

7 motorcycles burned down in arson attack in Male’ City