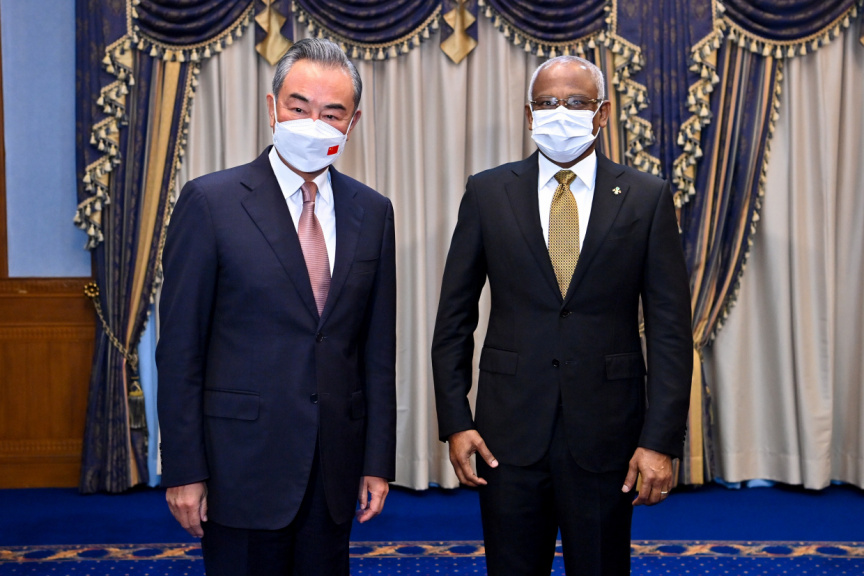 China’s Foreign Minister Wang Yi has called on President Ibrahim Mohamed Solih, as part of the former’s official trip to the Maldives.

The meeting was held this evening, at the President’s Office.

During the meeting, President Solih and Minister Yi spoke extensively on the existing bilateral ties between the two friendly nations, emphasizing that this year marks the 50th anniversary of political relations between the nations.

They also discussed a wide range of issues of mutual interest and benefit to the two countries.

Minister Yi highlighted that travelers between both countries had been linked for over 600 years, even though formal diplomatic ties were established just 50 years ago. He stressed that Chinese foreign policy is based upon mutual trust, solidarity, and respect for the sovereignty of other nations. He also noted that China is ready to contribute to the progress of all developing countries, including the Maldives.

President Solih and Minister Yi also spoke at length about the importance of the agreements signed today towards greater cooperation in areas of mutual interest – expressing hope that it would further strengthen existing relations between the two nations.

They concluded their meeting by reaffirming their shared commitment to continue working together for the common welfare of the citizens of both countries.

Minister Yi concluded his two-day trip to the Maldives and departed to China earlier tonight.