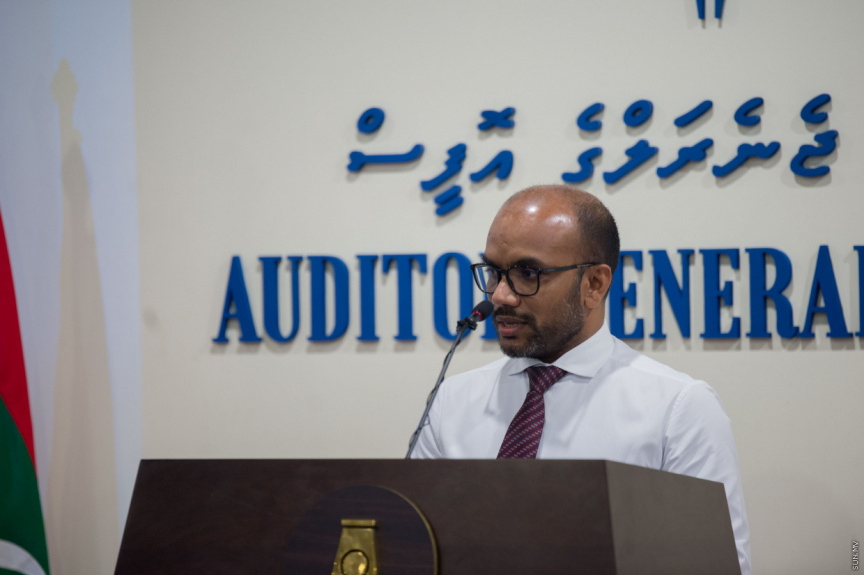 Finance Minister Ahmed Ameer speaks at the unveiling ceremony of Regulation on Audit and Accountability of SEOs and the Regulation on Public Interest Entity Auditors on November 9, 2021. (Sun Photo/Ahmed Aiman Ali)

Two regulations pertaining to the audit of State-owned Enterprises (SOEs) and Public Interest Entities (PIEs) have been unveiled.

The regulations were unveiled during a special ceremony at the Auditor General’s Office by Finance Minister Ahmed Ameer.

Speaking at the unveiling ceremony, Auditor General, President of Institute of Chartered Accountants of the Maldives (ICA) Hussain Niyaazy said that both regulations were formulated under a new strategy by the Auditor’s General Office and ICA Maldives.

“In all honesty, there is no space for the institution to conduct an independent financial statement audit I sign financial statements in the capacity of the Auditor General – whilst I also am the President of ICA Maldives,” he explained.

Therefore, Niyaazy said that a company’s board will be appointing the auditors to audit the company’s financial statement – whereas the Auditor General’s Office will monitor whether such audits are conducted in line with best practices.

Niyaazy said that with the new changes, audit reports will be formulated for the financial statements of SEOs. Additionally, a timeframe will be specified to hand over the financial reports to the auditors.

Minister Ahmed Ameer also spoke at the ceremony. He stressed the importance of the public being aware of the financial standing of companies with government shares.

Vice President of the Privatization and Corporatization Board Asim Mohamed also spoke at the ceremony. Noting that receiving complaints with regard to delays in getting the audit report by the Audit Office is common – Asim said that companies with government shares must take responsibility to conduct their own audit.