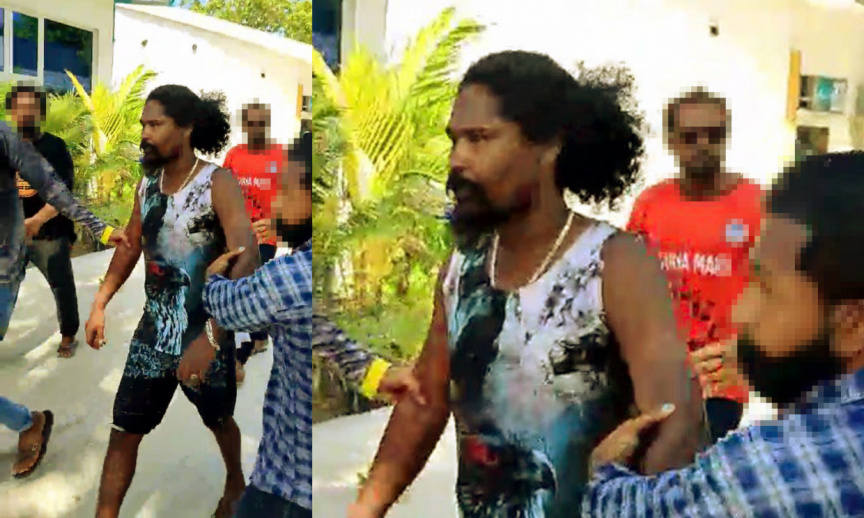 Ali Jamshad who ADh. Dhangethi residents believe to be involved in the murder of Mahmood Aboobakuru being taken to the police station by the residents.

Sun can confirm that the two individuals accused by the public in the death of Mahmood Aboobakuru who was found murdered inside a well at ADh. Dhangethi last Thursday – was arrested over a drug trafficking case.

The two individuals are from the same family; Shaarih being the son of Jamshad’s sister.

It was later confirmed to Sun that the three of them were in police custody regarding another case.

The three were taken to ADh. Mahibadhoo on Friday, in custody.

As per information received to Sun, Mahibadhoo Magistrate Court has remanded the three individuals in police custody. In this regard, Jamshad and Shaarih’s remand was over a drug trafficking case.

However, Sun has been unable to confirm how long they have been remanded for – in addition to the details as to why the woman had been remanded in custody.

Mahmood was found murdered during a search for him – after having been declared missing. He was last seen alive last Wednesday night. Dhangethi residents commenced an island-wide search at 10:00 am on Thursday morning. His body was discovered during the search at around 15:15 in the afternoon – inside a water well at an abandoned house; bound and stuffed inside a sack.

Whilst Dhangethi residents’ accusations regarding the murder were fixated on Jamshad and Shaarih – in a surprising turn of events, the Police announced the arrest of a male migrant worker from Dhangethi in connection to Mahmood’s murder on Saturday.  The migrant in question works as a live-in caregiver for an elderly man in a house close to where Mahmood’s body was found.

The house was searched by the Police on Saturday morning – prior to his arrest. It is located approximately 100 meters from where Mahmood’s body was found.

A Dhangethi resident who spoke to Sun said the Police searched the house in response to multiple reports of a suspicious noise being heard from the house on the night Mahmood disappeared.

When presented before the court for his remand hearing – the migrant worker was remanded in police custody for 15 days.