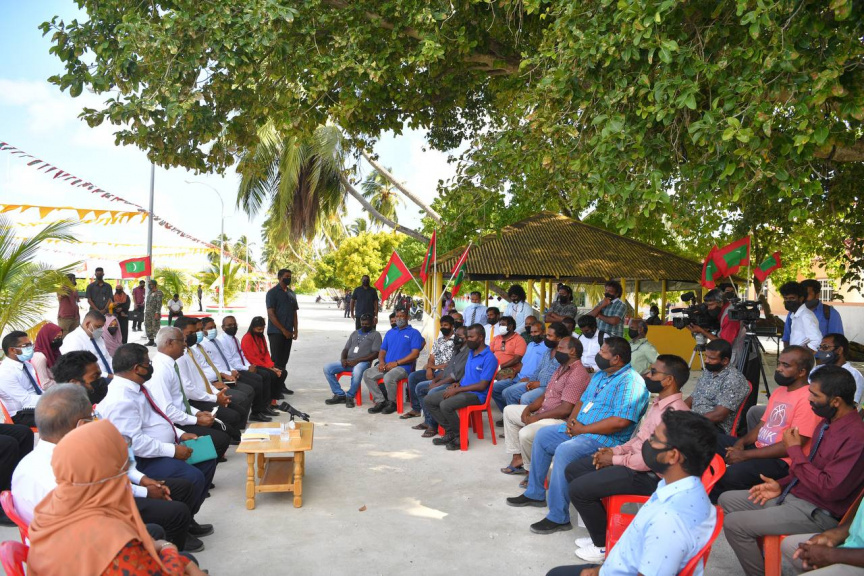 President Ibrahim Mohamed Solih said on Thursday that the government is considering a policy to levy a tax on import of produce that are locally grown in enough quantities to fulfill the demand in Maldives.

He made the statement in a meeting with farmers from Th. Kandoodhoo on Thursday afternoon, as part of his tour of Th. Atoll.

Speaking at the meeting, President Solih assured farmers that there are various opportunities for farming and high demand for local produce in Maldives.

He urged the farmers to take part in the activities conducted by Agro National Corporation (AgroNAT), a state-owned enterprise with the mandate to assist in developing the agricultural sector.

The farmers raised concern regarding pertinent issues facing them. They noted that the AgroNAT scheme does not include chili pepper farming, one of their main products, and requested to look into fair pricing strategies for locally-grown fruits and vegetables.

They also raised concerns regarding the availability of farming equipment and resources, as well as the technical expertise required for the advancement of the sector.

The farmers also said that there were some undocumented foreigners working in the local farms and asked President Solih to facilitate a way to regularize them as documented foreign workers.

President Solih responded that the government was considering a policy to levy a tax from companies importing goods already produced and available locally.

He also promised to look into the matter of providing technical expertise and regularizing undocumented foreign workers.

He provided assurance that all concerns raised by the farmers would be raised with the relevant government agencies to find swift and efficient solutions.

President Solih’s visit to Kandoodhoo was the sixth destination in his tour of seven islands of Th. Atoll. He was accompanied on the tour by cabinet ministers, as well as senior officials from the President’s Office and a delegation of high-level government officials.