Emergency Medical Services Center to be built in Dharavandhoo 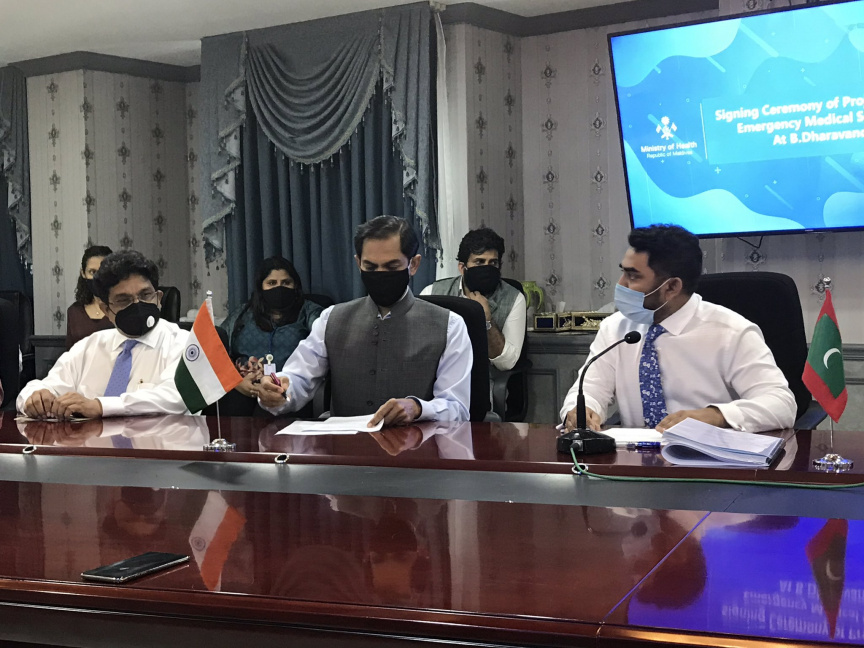 Maldivian Health Ministry and the Indian government have signed a MVR 8 million agreement to build an Emergency Medical Services Center in B. Dharavandhoo.

The project is being funded under a MVR 106 million grant assistance released by India for small and medium projects in Maldives.

The agreement for the Emergency Medical Services Center in Dharavandhoo was signed by Health Minister Abdulla Ameen and Indian High Commissioner Sunjay Sudhir in a ceremony held at the Health Ministry on Monday.

The Indian High Commission has issued a statement announcing the Indian government will be financing the development of infrastructure and procurement of machinery for the center.

The Indian High Commission stated that health sector cooperation remained one of the foremost priorities of the partnership between Maldives and India.

“India is privileged to be associated with a project geared to provide immediate and urgent medical interventions to the local community,” said the Indian High Commission in its statement.

The project in Dharavandhoo is one of several small and medium projects financed by India under the MVR 106 million grant scheme. Some of the projects  completed under the scheme includes the Convention Center in A. A. Ukulhas, the largest convention center outside of the capital Male’, which was opened last year, and the coastal protection project in A. A. Rasdhoo completed in March.

“These small and medium grant projects have opened a new chapter in the development of partnership between India and Maldives,” said the Indian High Commission in its statement.

The High Commission has also stated that they hope for the completion of all remaining projects under the MVR 106 million grant by the end of this year.