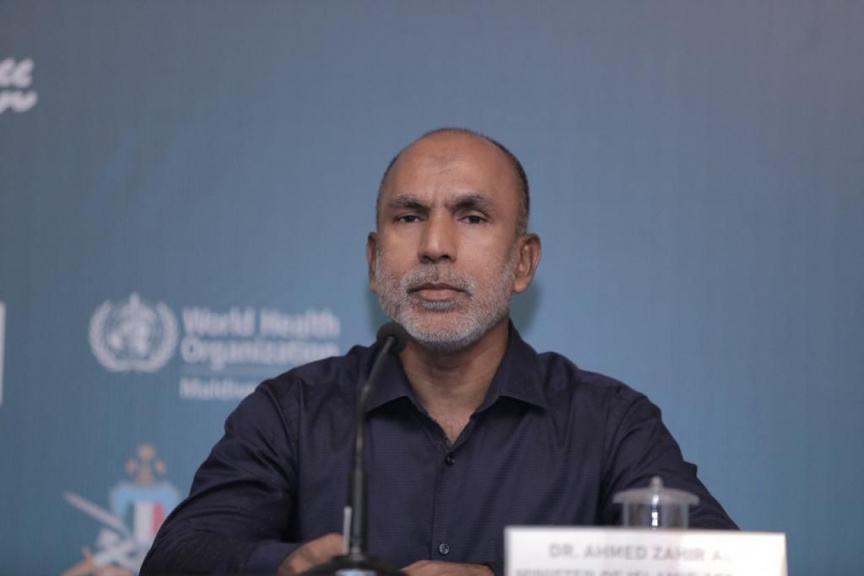 Minister for Islamic Affairs of the Maldives Dr. Ahmed Zahir said that the the time for compassion and kindness towards each other is now on April 19, 2020 as the Maldives battled to contain the Covid-19 pandemic virus. (Sun Photo/Fayaz Moosa)

This the time for compassion and kindness towards each other, Minister for Islamic Affairs of the Maldives Dr. Ahmed Zahir has said.

The minister was speaking in a press conference tonight when he remarked that the religion of Islam required its Muslim brothers and sisters to act as a whole. He said that God would test humans in many ways on earth and that the situation with Covid-19 was a test by God on the country. The minister called on all Maldivians to be compassionate to each other and extend a hand of kindness as the country battles the situation.

Prophet Muhammed (PBUH) had described Muslims as a single body, said the minister who noted that a burden or injury to a single organ of that body would affect the whole body which will carry the pain. Muslims are also the same, said the Minister who added that everyone should share the pain and burden of others.

“Prophet Muhammed (SAW) had described all Muslims as a single body. If something happens to one if an injury is inflicted on one part of the body the whole body will feel that. The same way the pain is shared if a Muslim brother or sister faces a burden the other Muslim brothers and sisters will also have to share the burden. This is that time. Time to care…and provide assistance.” said the minister.

Allah would not forget the person as long as the person maintained compassion and kindness towards the other, said the minister who quoted a Hadith of the Prophet when he called on the public to let go of selfish desires and wish the best for others.

The Minister also called on the public to take the highest of safety measures and obey the instructions of the authorities before calling to continue praying at home and recite the Holy book of Quran as much as possible and assist the family and children during these difficult times.