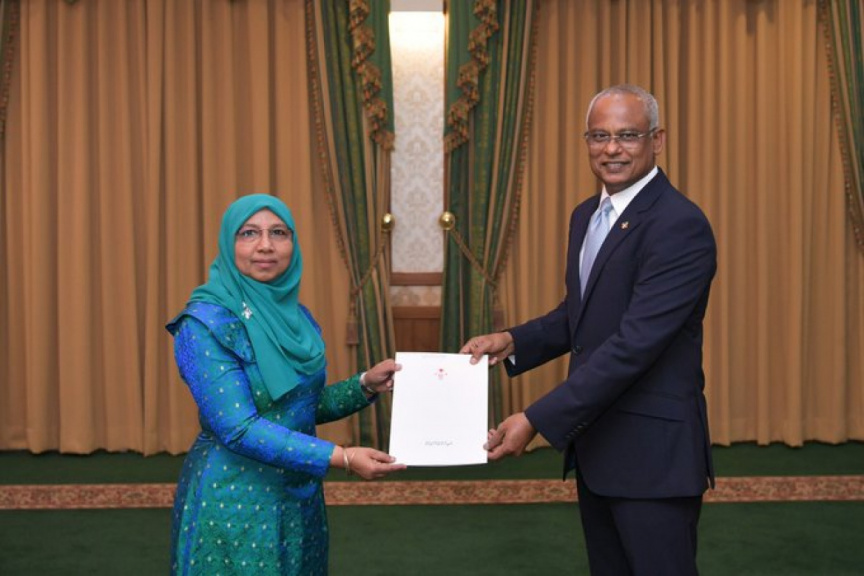 Aishath Mohamed Didi (L) is presented with her letter of appointment as Minister of Gender, Family and Social Services by President Ibrahim Mohamed Solih (R) on February 9, 2020. (Photo/President's Office)

Aishath had served as the Maldivian Ambassador to India prior to being nominated by President Solih to replace Shidhatha Shareef, who tendered her resignation on Thursday.

She was presented with her letter of appointment in a ceremony at the President’s Office on Sunday afternoon.

Aishath served in the Maldivian education sector from 1982 to 1998. She began her career in the education sector as a science teacher at Majeedhiya School, and went on to serve at the Educational Development Center, and the Institute for Teacher Education, after which she served as the Deputy Director of the Unit to Protect the Rights of Children, and a senior post at the UNICEF Maldives.

She had also served as the Gender Minister from 2005 to 2008, during former President Maumoon Abdul Gayoom’s administration, after which she served as a consultant in education, children and women’s rights.

From September 2010 onwards, she served in top positions within Villa College, including the Executive Director (Academic).

US amb. to Israel warns against West Bank annexation