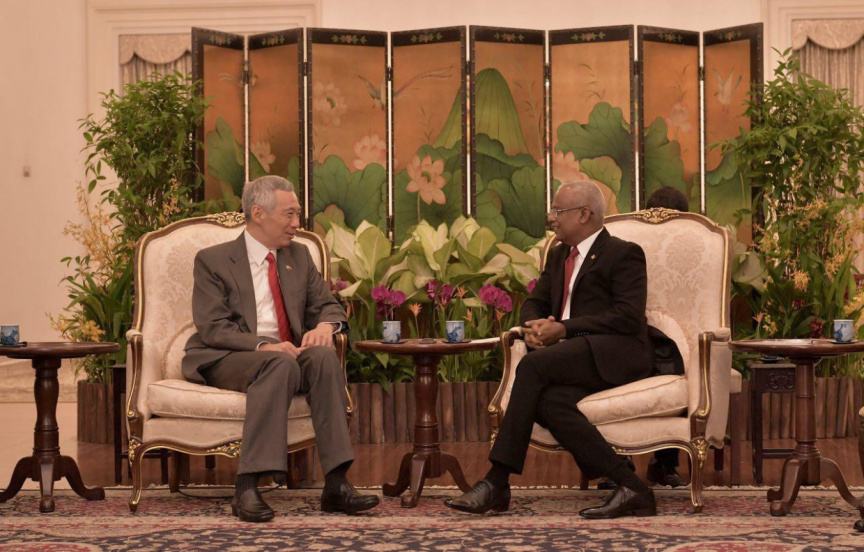 Maldivian President Ibrahim Mohamed Solih, who is on a state visit to Singapore, has met with Singaporean President Halimah Yacob and Prime Minister Lee Hsien Loong.

The meetings took place at Istana, the official residence of the Singaporean president, this Monday.

President’s Office reports that the leaders, during the meetings, expressed keenness in reinforcing the ties which has existed between Maldives and Singapore for over 40 years.

The main focus of the discussions was on trade and commerce, security cooperation for sustained peace and prosperity, combating terrorism, and environment and climate change.

President’s Office reports that President Solih, during his meeting with President Halimah Yacob and OM Lee Hsien Loong, thanked the Singaporean government for its offer of technical assistance, and welcomed the additional pledges of assistance to facilitate mutual study visits and knowledge sharing on areas of water and waste management, public housing and urban planning.

He said the assistance will immensely contribute to his government’s efforts to strengthen human resources and governance.

Earlier this Monday, President Solih and PM Lee observed the signing of two MOUs between the two countries.

The first of the MOUs is an updated Air Services Agreement which is designed to improve air connectivity, establish greater commercial links and facilitate social liaison between the two countries.

Both President Halimah and PM Lee have accepted the invitation extended to them to visit Maldives, and agreed to work on a mutually convenient date for the visit.