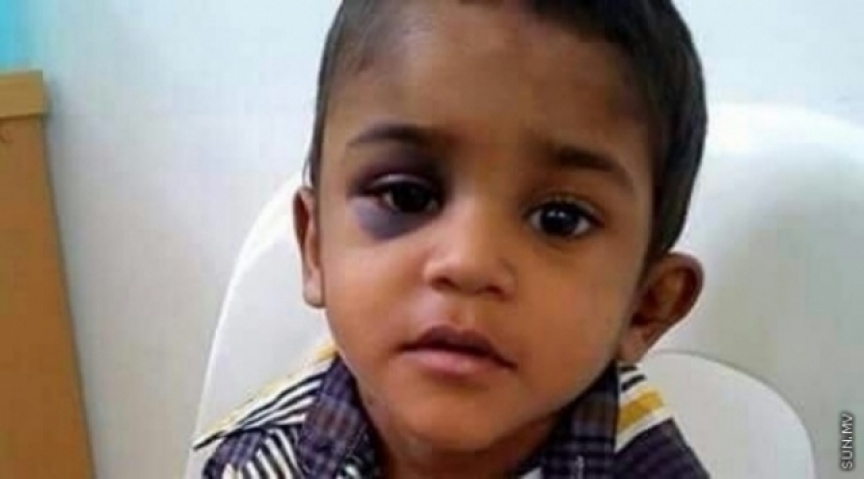 Mohamed Ibthihaal, 3, pictured sporting a black-eye before his death on January 28, 2015. (File Photo)

Ibthihaal, 3, was found dead at his home in V. Rakeedhoo with visible injuries on his body on January 28, 2015.

Afiya was charged with first degree murder of a child and has previously confessed to the crime in court.

Today's hearing was set to take accounts of one of the three state witnesses against the defendant, Samila Mohamed (Vaavu atoll Rakeedhoo); an acquantice of Aafiya.

Giving her testimony to the court Samila said that Aafiya has brought her two small children to her house but never with Ibthihaal. Samila said that when questioned about it, Afiya's response was that Ibthihaal was a naughty child that didn't eat and disturb other children and Afiya was unhappy that the question was being brought up repeatedly.

Samila said that Ibthihaal comes to her house alone and is noticed to be a quiet child who accepts any food that is given to him.

The state witness, Samila, also testified to witnessing and hearing Afiya say that she would beat Ibthihaal to death.

When the judge asked Afiya for a response to the accusations, Afiya stood up immediately and stated that Samila has lied about everything.

Afiya said that she has never hurt Ibthihaal and he was injured when he came back from his grandmother at Meemu atoll Dhiggaru.

Court to deliver verdict in Ibthihaal case on March 12