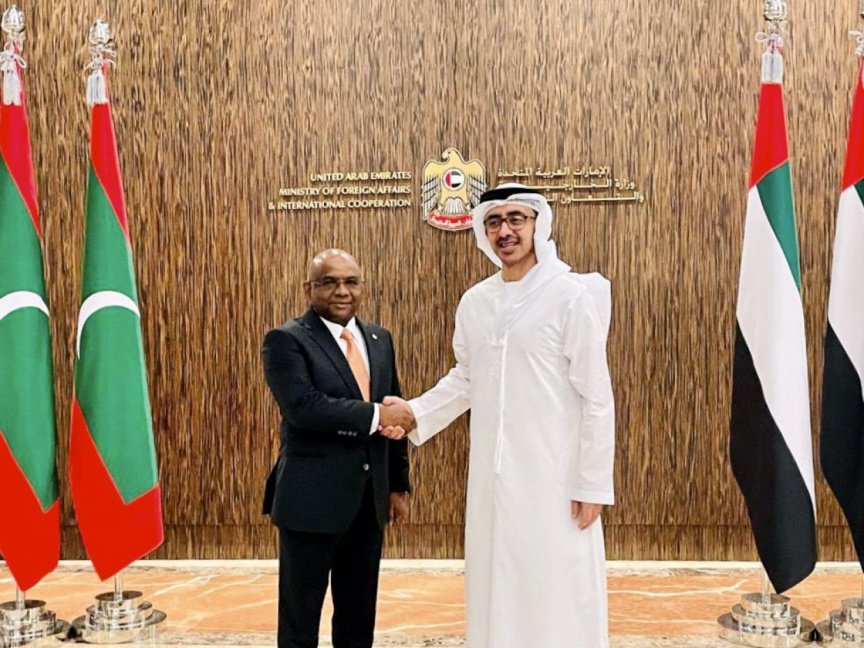 During this meeting held at the Ministry of Foreign Affairs of UAE, Minister Shahid conveyed greetings and well wishes from President Solih to the leadership and the Emirati people.

It was an honour to meet the distinguished Foreign Minister of #UAE H.H. @ABZayed, as Special Envoy of President @ibusolih, and handover a Letter to President of #UAE H.H @MohamedBinZayed.@MoFAICUAE @ofmuae pic.twitter.com/1oDvtCBGx2

Furthermore, both the foreign ministers spoke on ways that could further strengthen and diversify the long-standing relations between Maldives and the UAE.

In Addition to this, Minister Shahid reiterated appreciation for the generous support and assistance provided to the Maldives through the Abu Dhabi Fund for Development (ADFD).

He also expressed gratitude on behalf of the government and the people of Maldives for the invaluable contributions made by the UAE towards the socio-economic development of the country over the years.

The ministers expressed their renewed commitment to working together on issues of mutual interest, both bilaterally and in the international fora.

Maldivian Ambassador to the UAE Aminath Shabeena and senior officials from the Maldivian Foreign Ministry accompanied Shahid to the meeting.

It was good to meet with the Director General of the Abu Dhabi Fund for Development #ADFD Mohamed Al Suwaidi today.

Had the opportunity to touch base on ongoing projects.

Agreed on the need for close collaboration to enhance development cooperation. pic.twitter.com/Ek5DsC7XVB

Speaking about this meeting via Twitter, Shahid said that they were able to "touch base" on ongoing projects, as well as "Agreed on the need for close collaboration to enhance development cooperation."

is undertaking this official visit to the UAE as the Special Envoy of President Solih.

Flydubai to bridge Gan-Dubai with direct flights in '23