President: We must solve congestion in Male’, relocate garages 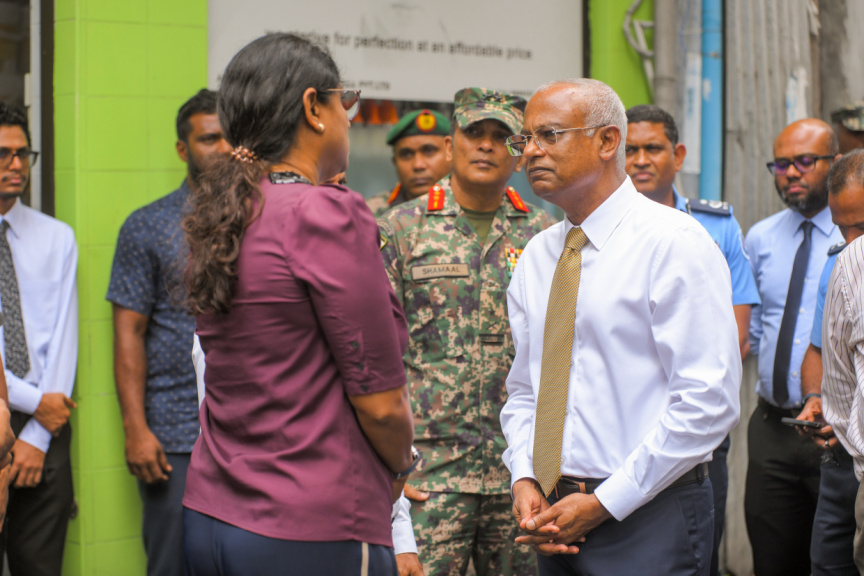 Lessening the risk of dangerous incidents such as the fatal fire in Maafannu district early Thursday requires easing the congestion in Male’ City, which is something the government will work on, states President Ibrahim Mohamed Solih.

The fire broke out in a car repair garage in M. Nirufehi, located near the Maaveyo Mosque, around 12:30 am. The garage is located on the ground floor, while the first-floor houses cramped living quarters for migrant workers – the only ventilation – a single window.

Speaking to press outside the building Thursday morning, President Solih said it was crucial to relocate garages and workshops to non-residential areas.

“What needs to be done in this, the key thing that must be done, is to solve congestion in Male’. And to relocate garages, workshops and businesses like this to a designated area away from the residential area,” he said.

President Solih said his administration planned on relocating such businesses to designated areas in Gulhifalhu and Thilafushi.

“This is something that requires an urgent solution,” he said.

President Solih said he would discuss the urgent measures that must be taken in response to the fire.

He also spoke about how the fire in Abadhahfani neighborhood in 2019 sparked changes.

According to authorities, the migrant quarters above the garage had housed at least 38 people.

28 people were evacuated out of the building, while nine people were initially reported missing.

Seven of them were found dead, while two were taken to Indhira Gandhi Memorial Hospital (IGMH) with severe burns. One of them died at the hospital, while the second, identified as a Bangladeshi national, is in critical condition.

Speaking to press, Colonel Ibrahim Rasheed, Commandant, MNDF Fire and Rescue Service said the dead bodies recovered from the scene were severely burnt, making it difficult to identify them or even determine their sex.

PPM-PNC: Govt. must not forget tragedies