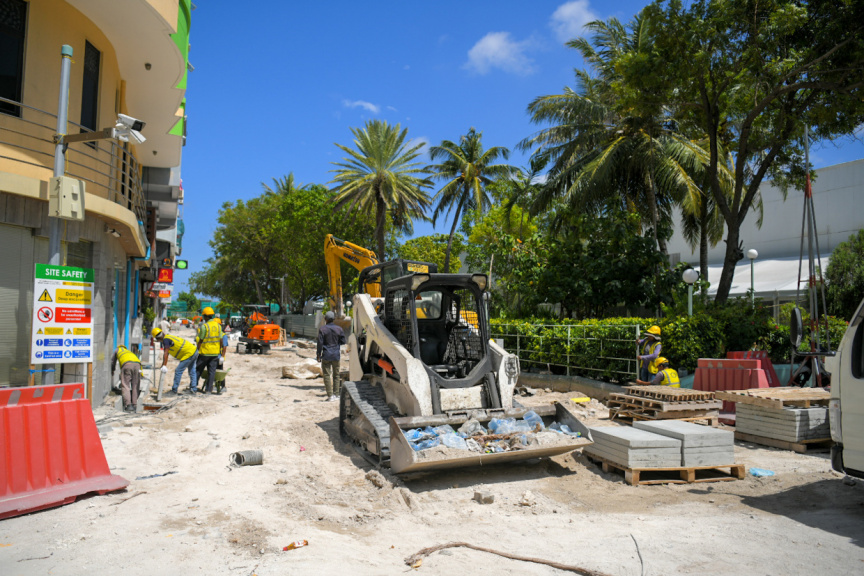 Civil Court, on Sunday, decided there was no capacity to issue an interim order to halt the redevelopment works of Ameenee Magu contracted to Road Development Corporation (RDC) by the government.

The case was submitted to the Civil Court by Parliament Speaker, former President Mohamed Nasheed – requesting an interim order to immediately cease the redevelopment works of Ameenee Magu which has seen the cut down trees planted at the road. Nasheed cited the deforestation could impact people’s health, and aid in climate change.

As per Nasheed, it is a responsibility of Planning Ministry to identify the negative impacts of the deforestation. He claims the responsibility has not been fulfilled. Nasheed said that the deforestation is a violation of the Ministry’s duty to protect the environment when the project could have been carried out without cutting down the trees.

Planning Ministry, in their defense, had said that none of trees in Ameenee Magu are protected under any law of regulation. The Ministry also stated that the government sees no obstructions to remove trees absolutely required by the project. They also noted that they are monitoring the project in collaboration with the Environmental Protection Agency (EPA) that has not taken a contradictory decision on cutting the trees to date.

Speaking on the case, RDC said that advise from a number of experts were sought before commencing the project. They stressed to be paying special attention to minimize impact on the environment whilst carrying out the project.

The judgement issued by the Civil Court in the case Nasheed lacked the legal capacity to request the interim order. In light of all points presented by both parties in the case, the Court said that there was no space to issue to an interim order.

Ameenee Magu redevelopment projects garnered much criticism from the public over deforestation of the road to carry out the project. The road, in Male’ City, is amongst one with the greatest number of trees – some of them being over 20 years old.

The redevelopment of Ameenee Magu was contracted to RDC by Planning Ministry on July 3.

Under the project, valued at MVR 84.4 million, RDC will develop 7.1 kilometers of asphalt road, install a storm drain system, and install street lights.

The company is required to complete the project within 210 days.

Physical works on the redevelopment of Ameenee Magu was officially inaugurated on August 30, during a special ceremony.