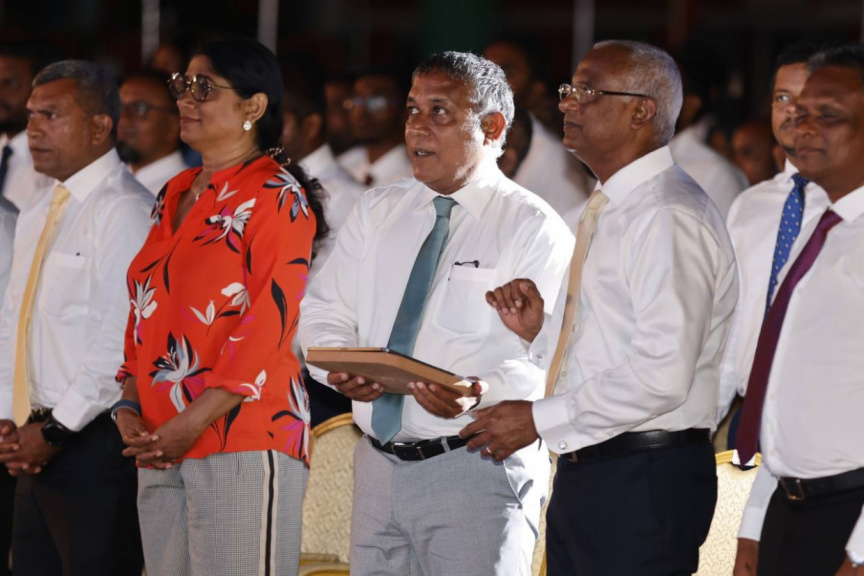 The service was officially inaugurated during a special ceremony held at HA. Dhidhdhoo tonight, by President Ibrahim Mohamed Solih.

This ceremony also saw the attendance of Minister of National Planning, Housing and Infrastructure Mohamed Aslam, other cabinet ministers, members of the parliament, and other senior government officials. MTCC’s CEO Adam Azim, and senior management of the company also attended the ceremony.

RTL ferry service is provided under the ‘Integrated National Public Ferry Network’ project which aims to connect the Maldivian islands through a high-speed ferry network; an electoral pledge of President Solih.

High-speed ferry service is currently in place at the island of Zone 1 (Haa Alifu, Haa Dhaalu and Shaviyani Atolls) under the first phase of the project. Phase two and Phase three of the project will see the islands in the remaining 17 atolls of the Maldives linked by high-speed ferry service. The government states this service will boost economic and social development across the nation.

The service provider, MTCC, said that modern and fast speedboats are utilized to carry out the ferry service in Zone 1. These air-conditioned speedboats are built with space for passengers to keep their luggage and also have restrooms. They are also easily accessible to persons with disabilities and sick people.

MTCC’s modern speedboat fleet comprises of 13 in total at present – which facilitates daily commutes in the 41 islands at Zone 1.

The company detailed that RTL ferry services are offered to the public as a technology-friendly service. In this regard, they noted that the ferry schedule can be viewed, tickets can be booked, and payments can be made for the tickets via smartphone. Otherwise, MTCC, said that passengers will be able to travel simply by showing their ticket number.

MTCC’s aim is to link the whole nation in one transport view within the next 24 months. They are currently undertaking the work necessary to introduce the service in additional nine atolls within the next nine months.

The company estimates that 800 new jobs will be created when the service is expanded nationwide. They stressed that these employees will be capable, trained, and receive an adequate salary for their responsibilities.

RTL ferry service at Zone 1 was officially inaugurated by the president as part of his ongoing trip to four islands in the region.

The main reason for undertaking this trip is to officially inaugurate major government projects that have been completed in the region – viewed to benefit development significantly, and create more opportunities.

Dhidhdhoo is the last destination of President Solih during this visit.

Minibuses carry 48,000 passengers in one week

'Best sector to increase jobs for youth is tourism'