WAMCO: Smoke emission from fire at Thilafushi expected to last a week 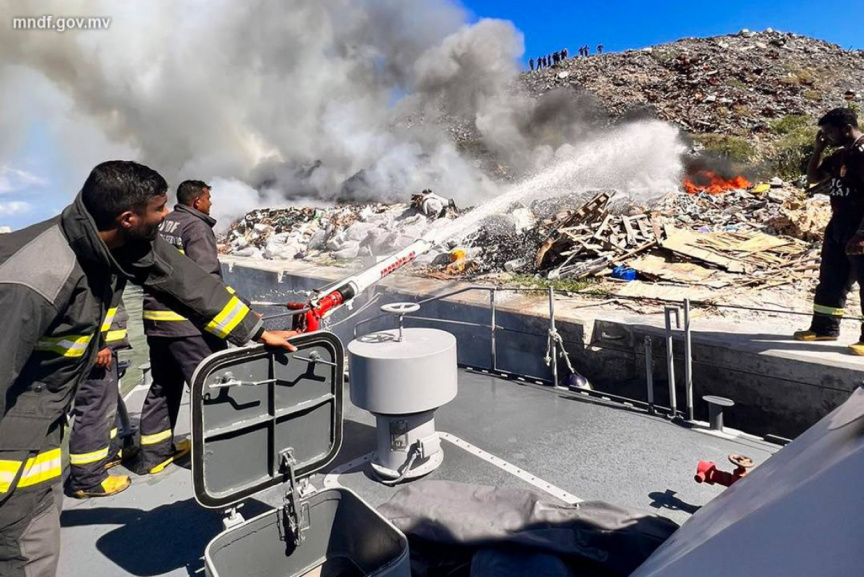 MNDF attends to scene of a fire at Thilafushi. (Photo/MNDF)

Waste Management Corporation (WAMCO) has warned that smoke emission from a fire at Thilafushi on Wednesday, is expected to last a week.

In a statement released on Wednesday night, WAMCO said that a fire broke out at the temporary waste disposal area earlier in the day.

“Due to increase in the amount of waste brought to Thilafushi, leading to an increase in work undertake to manage waste – the waste was temporary disposed in the area between the keywall and the company at Thilafushi,” they detailed.

WAMCO said that the fire which broke out was subdued by their staff and MNDF personnel.

“Nevertheless, we note the emission of smoke from the area. In the upcoming week or so, it is likely to see fire in the area, with heavy smoke,” they added.

In light of the incident, WAMCO has advised vessels carrying waste to Thilafushi to adhere to regulations set down, and to be cautious regarding things which lead to fire.

The company also stressed that they are working alongside Environment Ministry to eradicate smoke emission from Thilafushi, and manage waste sustainably in line with government policies.

In December last year, the government inaugurated the ‘Greater Male’ Waste to Energy Project’ in line with these efforts, which aims to establish a sustainable regional solid waste treatment system in the Male’ region. The project is designed to reduce disaster risk and improve climate change resilience while creating a cleaner environment and reducing greenhouse gas emissions.

WAMCO: Not received over MVR 42 million in fees

WAMCO: Must sort waste prior to collection from June