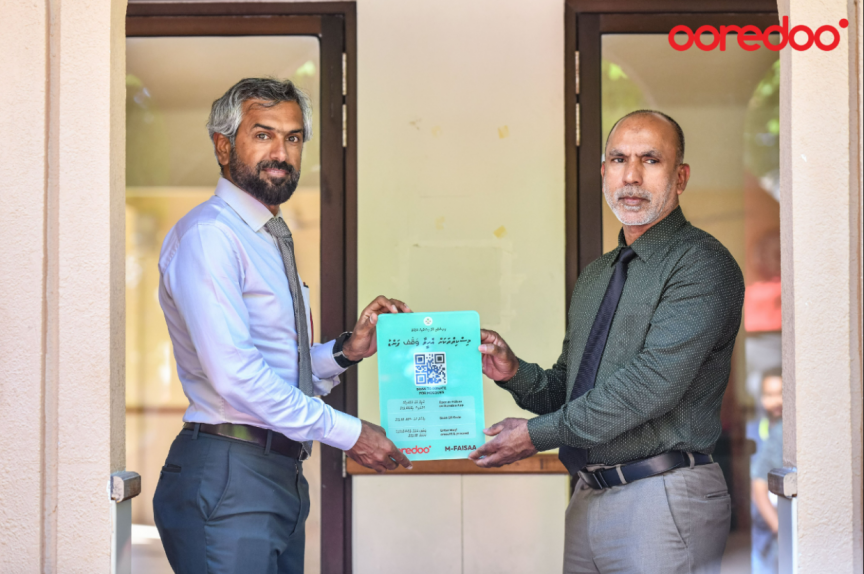 Ooredoo Maldives partners with Islamic Ministry to enable donations to Waqf Fund established to aid in renovations and developments of mosques via m-Faisaa. (Photo/Ooredoo Maldives)

Ooredoo Maldives has enabled donations to Waqf Fund established to aid in renovations and developments of mosques via m-Faisaa.

The ceremony also saw the attendance of dignitaries from Himmafushi and the management of Ooredoo Maldives.

Speaking at the ceremony, Islamic Minister Zahir said that as many people in the community wish to donate for the maintenance and development of mosques across the nation – the Ministry has always worked to make depositions of funds to Waqf Fund established for the purpose easier.

“In this regard, I believe that it would be of great convenience to the people to be given the opportunity to assist mosques through Ooredoo m-Faisaa service,” he added.

Ooredoo’s CEO Al-Hamadi, who also spoke at the ceremony, said that the company always works towards building the Maldivian community and facilitating development by leveraging its resources.

“Waqf funds even around the world are one of the most sustainable sources of funding for charitable causes. Today we are delighted to support the Waqf Fund established by the Islamic Ministry by enabling people to make donations conveniently via our mobile money platform m-Faisaa,” he added.

Ooredoo said that donations can be made to Islamic Ministry’s Waqf Fund simply by scanning the QR code placed at mosques via m-Faisaa on Ooredoo App.

The first QR code under the initiative was placed at at Masjid al-Inara. Ooredoo states more QR codes will be placed in other mosques as well in the future.