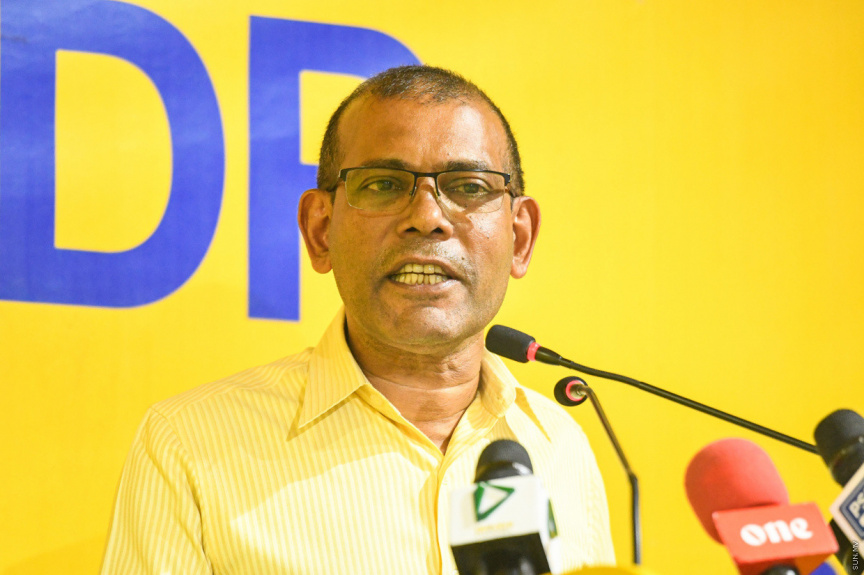 Leader of Maldivian Democratic Party (MDP) and Speaker of Parliament, former President Mohamed Nasheed warned Tuesday that the party will lose 42 percent of votes if it fails to accommodate a referendum to change the system of government in Maldives from presidential to parliamentary system.

In a meeting at the MDP Haruge Tuesday evening, Nasheed MDP stood to take 112,000 votes if it presented a united front and worked together.

Nasheed said he always did his calculations based on political realities.

“I believe that if we fail to make systemic change, 42 percent of MDP members will not vote for the government. That’s 47,000 people. Out of 112,000. That leaves the government with 65,000. That is 27 percent of total voters. This is the reality. The reality is clear from numbers,” he said.

It also calls to declare a prime minister elected among parliamentarians as the head of government, and a president elected through popular vote as head of state.

The resolution also proposes establishing the policy for the national list of parliamentarians, based on the votes political parties receive in parliamentary elections.

The resolution was seconded by MDP’s deputy leader, Minister at the President’s Office Mohamed Shifaz.

Additional proposals on the resolution include having the Cabinet composed of parliamentarians, setting the maximum limit of parliamentarians to 87, limiting the Supreme Court bench to five justices, and changing the composition of the Judicial Service Commission.

The congress is scheduled to be held on August 19.

'President Solih ruling against wishes of the people'

Live coverage of the 6th episode of 'Ask Speaker'