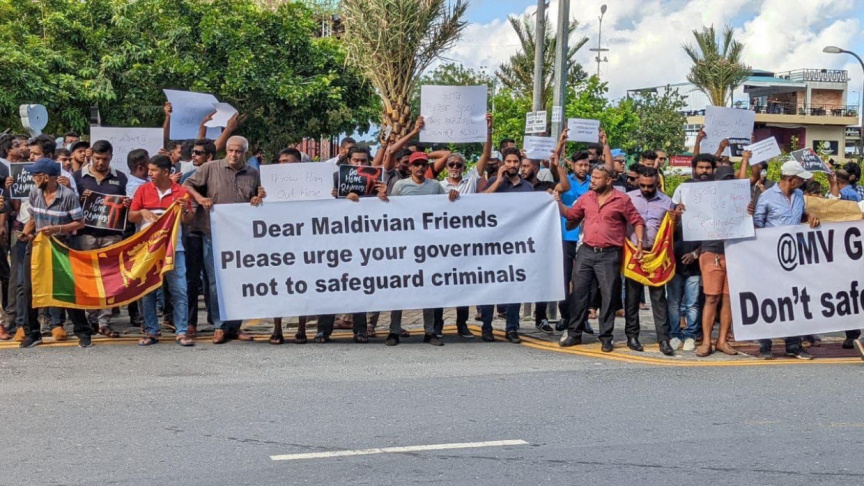 The court has granted conditional release for a Sri Lankan residing in the Maldives that was arrested on Wednesday during a protest held in Male’ City against the country’s embattled President Gotabaya Rajapaksa.

The Sri Lankan national was arrested during yesterday’s protest for obstruction of justice and disobeying police instructions.

A Police Spokesperson told Sun that when presented before the court for a remand hearing on Thursday, the protestor was granted conditional release.

However, the conditions of the release were not disclosed by the Spokesperson.

Sri Lankans residing in Maldives, on Wednesday, staged a protest at Carnival Area in Male’ City which was prompted by President Rajapaksa’s arrival in the Maldives – presumed under the protection of Maldivian government. Approximately 150 people participated in the protest.

The protest saw the partition of some Maldivian citizens as well. They urged against granting asylum to President Rajapaksa.

Sri Lankan presidents are protected from arrest while in power, and it is likely Rajapaksa planned his escape while he still had constitutional immunity.

While he yet has to tender his resignation – President Rajapaksa left Maldives on Thursday morning on a flight of Saud Arabian Airlines bound to Singapore. Media giant, Associated Press reported that the Sri Lankan president is set to transit at Singapore, before moving on to Jeddah, Saudi Arabia.

Sri Lankans accuse the president and his relatives of siphoning money from government coffers for years and Rajapaksa’s administration of hastening the country’s collapse by mismanaging the economy. Although the family denies the corruption allegations, President Rajapaksa acknowledged some of his policies contributed to the turmoil.

Police dispose of alcohol in their custody