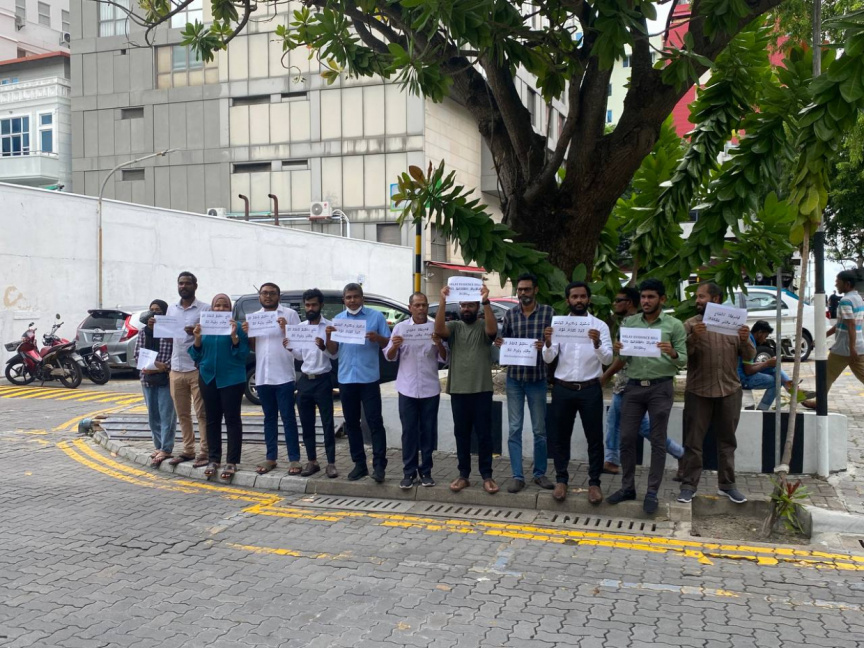 Journalists have gathered near the Parliament in protest of the Parliament’s decision to move ahead with the source disclosure provision in the Evidence Bill, which could force them to disclose their sources. (Sun photo)

Journalists have started to gather in a silent protest outside of the Parliament protesting the Parliament’s decision to move ahead with the source disclosure provision in the Evidence Bill.

The bill is scheduled to be passed during the Parliament session on Thursday, which is currently ongoing.

The Maldives Journalist Association expressed concerns over the decision to move ahead with the bill without input from the association and the Maldives Media Council (MMC) to ensure the provisions are not open for misuse.

We are extremely concerned that the parliament is moving ahead with the "source disclosure" provisions in the Evidence Bill, without considering a comprehensive paper submitted by the MJA and separately by the @mmc_mv as well.@IFJGlobal @RSF_en @amnesty @TransparencyMV https://t.co/2ky4vz49Qx

MJA noted that the current draft has used “national security-related matters” and “acts of terrorism” without specifying which crimes can be categorised under these labels.

“With With #Maldives history of misuse of "acts of terrorism" and "national security" in politically motivated cases, it is concerning that the parliament will move ahead on this issue, without proper checks and balances in place to ensure these provisions are not abused in the future.”

Moreover, they highlighted that this draft has mandated the use of “balanced probabilities” to identify restrictions on source protection, rather than a three-part test that is a best practice utilised to determine limiting freedom  of expression.

As per MJA, should this draft be passed as it is, it would put press freedom at risk in Maldives, and also pave the path to abusing these provisions, forcing journalists to disclose their sources.

They called on the Parliament and MP’s to delay this bill, and take time to consider the comments submitted by MJA and MCC.