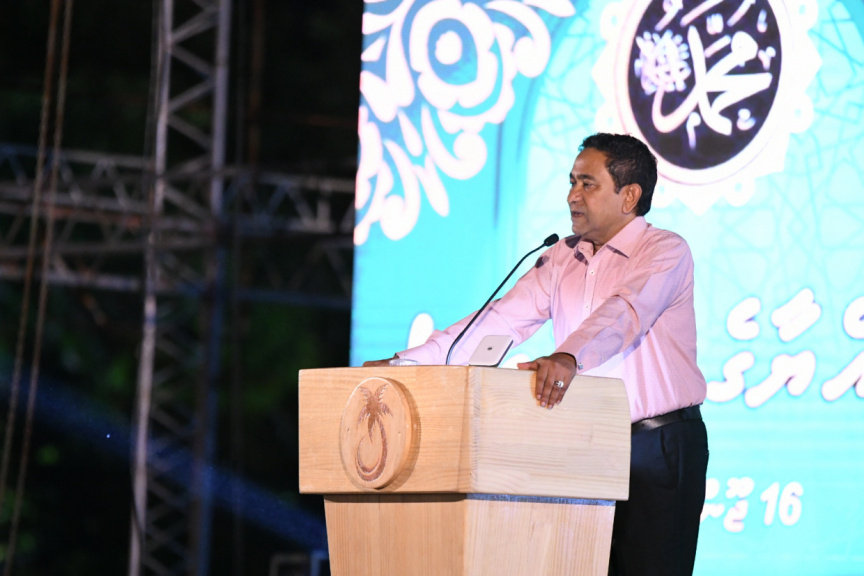 Opposition leader, former President Abdulla Yameen Abdul Gayyoom has stated that there is no difference between Israel and India at present day.

Speaking at a rally held on Thursday night under the name ‘My Prophet’ – Yameen said that the actions of India today, are equivalent to that of Israel.

In this regard, he detailed that lessons and songs being taught to young children aim to create hatred towards Muslims with such songs teaching children not to trust Muslims.

“What is India doing today. The most popular in the country at a present are pop songs. Hindustani singers. Their whole theme is not trusting Muslims. That Muslims should go to Pakistan,” he had said.

Yameen said India has been calling to normalize the deaths of people that do not follow such callings. He added that Palestine was met with its end due to similar actions of Israel.

“There is no difference, in this regard. In here (India) the same lesson is taught,” he had said.

Speaking further, Yameen said that the administration had only talked about democracy in order to win the elections. He added that this democracy, also comprises of boundaries.

Citing this, he went on to state that chances should not be given to anyone, even under freedom of expression, to disrespect the religion and culture of others.

He said that emergence of organizations such as MDN and Uthema after this administration had assumed power was a result of this chance existing.

Yameen said that waves do not come just once. In this regard, he said one wave coming after another is the reality of this world. Stressing that slandering Prophet Muhammed (PBUH) was not an act acceptable to any Maldivian nor Muslim – he underscored the importance of learning to face such challenges.

He also said that Hindus slandering the Prophet was not a coincidence. Noting that their philosophy is to build a Hindustan – Yameen said that they believe only Hindus should live in this Hindustan.

Sharma was suspended while Jindal was expelled from BJP.

A large number of youths held a motorcycle rally on last Saturday – in the name of ‘My Prophet’, against the slander of Prophet Muhammed.