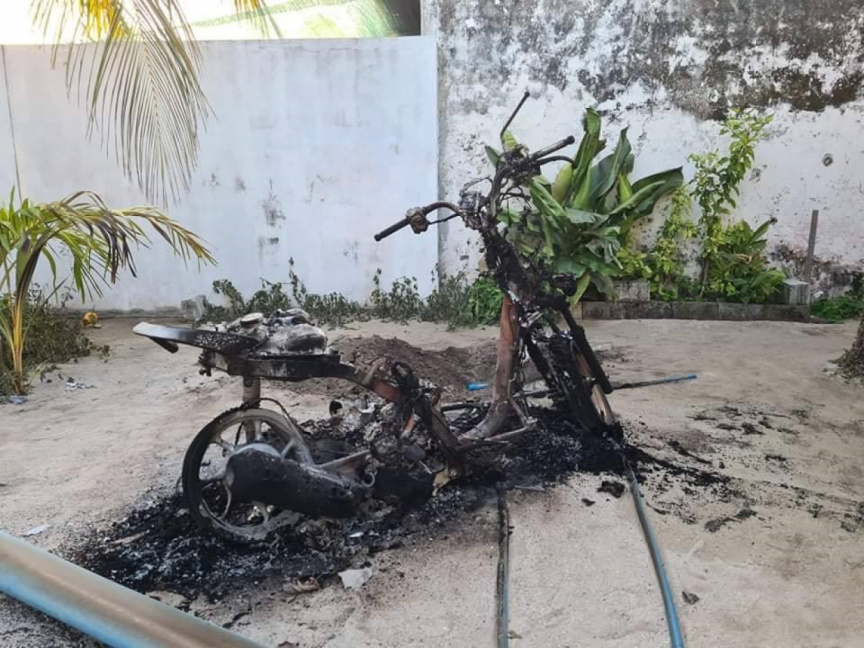 A motorcycle owned by a police officer is burned beyond repair in N. Miladhoo on February 18, 2022.

Prosecutor General’s Office (PGO) has filed charges against the suspect arrested for torching the motorcycle on a police officer in N. Miladhoo.

Abdulla Shuhad Ahmed, Fathumaage, N. Miladhoo, is accused of torching the motorcycle of an officer who worked in Miladhoo’s police desk while it was parked the yard of Maagasdhoshuge on February 18.

The PGO filed the charge of destruction of property against Shuhad with the Miladhoo Magistrate Court on April 6.

Shuhad faces a prison sentence of nine months and 18 days if found guilty of the charge.

The police had initially arrested three suspects in connection to the case, but later released the other two suspects.

Police previously said that the motorcycle was torched after the officer stopped a drug deal.

The motorcycle was burned beyond repair.

The crime was caught on video.

The video shows the motorcycle parked in the yard of a house. A man with his face covered enters the property, checks to see if there are any people around, and then pours petrol over the motorcycle.

He exits, and a second man with his face covered enters and sets the motorcycle on fire.