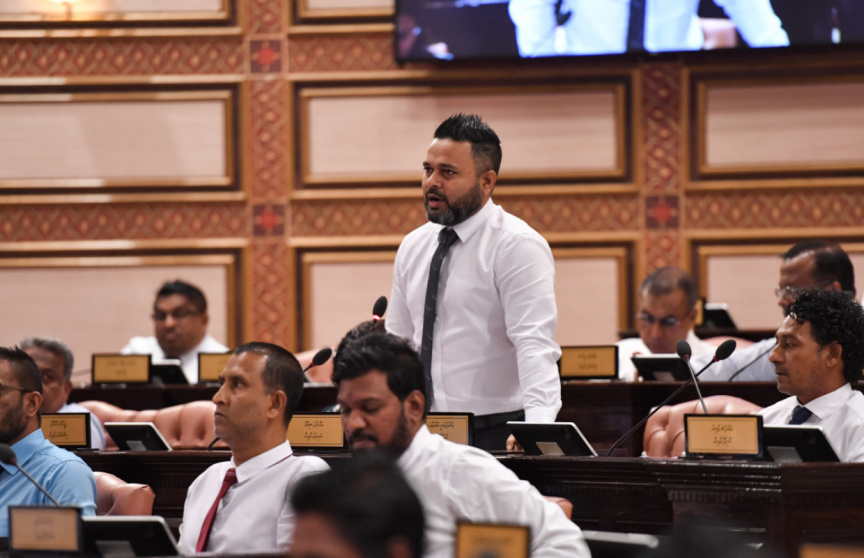 Speaking during the parliamentary debate session held at today’s sitting on the report formulated by Environment and Climate Change Committee on the bill proposing amendments to Water and Sewerage Act – MP Shiyam said that fulfilling the pledges made for the people in MDP’s manifesto is much better compared to impeding people’s rights by issuing decrees.

He further stated that decrees should not be issued to silence opposition and to obstruct its political activities.

“Decrees should not be issued to silence opposition parties and to obstruct its political activities. (I) am talking about much more important matters to issue decrees regarding,” he had said.

With reference to the bill proposing amendments to Water and Sewerage Act – MP Shiyam said that it is important to include a set of guidelines on how water and sewerage projects are awarded in the law.

‘EMERGENCY MOTION TO NULLIFY PRESIDENT’S DECREE ON ‘INDIA OUT’ REJECTED’

At today’s parliamentary sitting, Madduvari MP Adam Shareef Umar had submitted an emergency motion to nullify the decree issued by President Ibrahim Mohamed Solih last week to stop the ‘India Out’ campaign, declaring it a threat to national security.

In the vote taken on whether to accept or reject the motion – it was rejected by the votes of 27 members. Only five members had voted to accept the motion.

During his turn to debate on bill on Water and Sewerage Act – MP Shareef had address the rejected emergency motion as well.

Stressing that the decree is void – he said what is being witnessed today from MDP which had always advocated for freedom of speech is the issuance of decrees by president through powers not bestowed to him.

“It is a void decree in its formulation even. A decree written in the form of a displeased essay,” he had said.